Canada joins U.S.-led Artemis Accords to send human explorers back to Moon and beyond 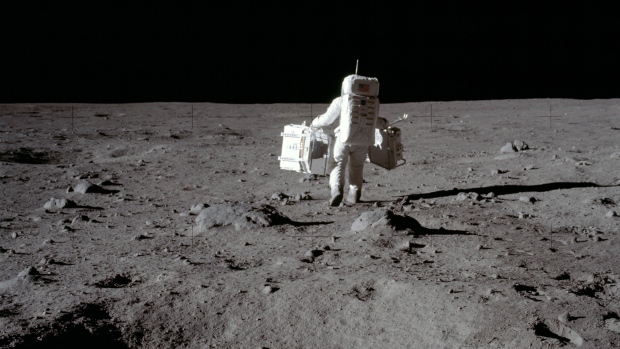 Lunar module pilot Buzz Aldrin carries a seismic experiments package in his left hand and the Laser Ranging Retroreflector to the deployment area on the surface of the moon at Tranquility Base, July 20, 1969. Canada has signed on to the Artemis Accords, a U.S.-led effort to establish global guidelines, based on the 1967 Outer Space Treaty and other agreements. THE CANADIAN PRESS/AP-HO-NASA, Neil Armstrong

WASHINGTON, Wash. - Canada has signed on to the Artemis Accords, a U.S.-led effort to establish global guidelines for sending explorers back to the Moon and beyond.

The accords, which establish rules for extracting and using “space resources,” commit signatories to exploring space peacefully and in the spirit of international co-operation.

They also call for transparency, the protection of heritage sites like the 1969 moon landing location and preventing the spread of orbital debris.

Canadian Space Agency president Lisa Campbell cheers the accords, but says more robust rules for the exploration of deep space are still a long ways off.

Campbell says the agency will begin consulting with Canadians, as well as a United Nations committee that oversees space exploration.

“The Artemis Accords are an important achievement for safe and sustainable space exploration,” Campbell said in a statement.

“More work is needed to further solidify the framework for deep-space exploration activities, both nationally and internationally.”

Canada has signed on to Artemis for the next 20 years, NASA administrator Jim Bridenstine told a virtual news conference Tuesday.

The country's role as a NASA partner has been evident for decades, Bridenstine said, most notably when the Maple Leaf-emblazoned Canadarm was a fixture of Space Shuttle missions throughout the 1980s and 1990s.

“Canada was the third nation on the planet to launch an object into space,” he said. “Canada has a very robust history in space exploration.”

It's also a country that's proud of its accomplishments in space, added Mike Gold, NASA's acting associate administrator for international and interagency relations.

“Canada is the only partner nation that has their space contribution on the $5 bill, so that absolutely makes Canada unique.”

NASA's Artemis program, launched in 2017, aims to land the first woman and “the next man” on the moon in the southern pole region by 2024.

This report by The Canadian Press was first published Oct. 13, 2020.