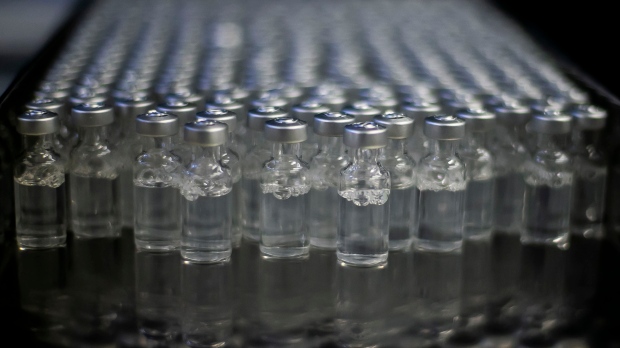 FILE - In this file photo dated Friday, Feb. 12, 2021, Doses of AstraZeneca vaccines for COVID-19 sit in vials at the Fiocruz Foundation after being bottled in Rio de Janeiro, Brazil. The World Health Organization Monday Feb. 15, 2021, granted an emergency authorization to the coronavirus vaccine made by AstraZeneca, a move that should allow its partners to ship millions of doses to countries worldwide as part of a U.N.-backed program to stop the pandemic.(AP Photo/Bruna Prado, FILE)

OTTAWA -- Two vaccine developers in Canada say a lack of federal funding early in the pandemic kept homegrown vaccines from moving as quickly as international versions.

John Lewis, the CEO of Entos Pharmaceuticals in Alberta, says his company is one of six that received about $5 million to move their COVID-19 vaccine along.

But Lewis says other countries invested more than $300 million per company to ensure they had funding to get through the entire vaccine development process.

He says those companies, such as AstraZeneca and Pfizer, now have vaccines approved in dozens of countries.

Speaking to the House of Commons health committee today, Lewis says Canada still has no vaccine through the finish line.

Dr. Gary Kobinger, a microbiologist at Laval University who was part of Canadian teams that helped develop vaccines for Ebola and Zika, says his non-profit had a vaccine with excellent early lab results last February, but it stalled because "we couldn't find funding."

This report by The Canadian Press was first published Feb. 22, 2021.