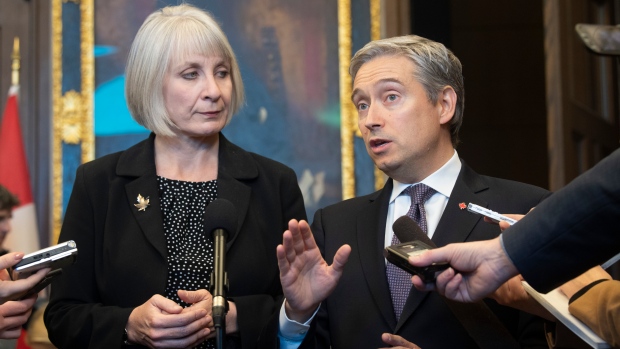 Minister of Health Patty Hajdu looks on as Foreign Affairs Minister Francois-Philippe Champagne responds to a question as they speak with the media about the coronavirus, Wednesday January 29, 2020 in Ottawa. THE CANADIAN PRESS/Adrian Wyld

Canada has a plane being prepared to fly Canadians out of the province in China at the centre of an outbreak of a new coronavirus, Foreign Affairs Minister Francois-Philippe Champagne said Wednesday.

The government is also advising all Canadians to avoid “non-essential” travel to China and has also scaled back its diplomatic presence in the country because of the outbreak.

The next step in the evacuation process is to secure co-operation from China to assist the 160 Canadians who have requested some form of help, Champagne said. Not all of them want to leave, he emphasized in an appearance on Parliament Hill.

China has all but sealed off one of its central provinces where the novel coronavirus was first detected. The virus causes respiratory symptoms similar to the common cold, but it can be deadly in very severe cases.

At Champagne's side, Health Minister Patty Hajdu said the government still has to decide what will happen with the Canadians who leave China, so as to prevent any spread of the illness.

Asked whether returning travellers would be held in quarantine, Hajdu replied: “We will always work to ensure the health of Canadians, whether they're abroad or whether they're here. So, yes what we're looking at is a scenario where we have all the measures in place to protect Canadians from exposure to the virus. Having said that, that's about as far as I can go.”

Officials say the 201 Americans taken to the United States from the Chinese city at the centre of the virus outbreak are undergoing three days of monitoring at a southern California military base to make sure they do not show signs of the virus.

Hajdu said the U.S. has a process that is working “efficiently.”

Champagne said Canada is working with allies to co-ordinate plans and make the logistics work, and that could take more time.

Some other countries have promised similar help for their citizens stuck in the province of Hubei - particularly those that have diplomatic offices there, which Canada does not - and Champagne said Canada isn't far behind them.

“The only plane which has landed is a U.S. plane that was scheduled to be there,” Champagne said, which was then followed by a plane sent by Japan earlier Wednesday.

He said Canada was at the “forefront” of the international response.

The virus has killed 132 people and infected more than 6,000 on the Chinese mainland and abroad.

A Twitter message by the Canadian Embassy in China said that as of Wednesday its diplomatic missions are working with reduced staff due to the coronavirus. It urged Canadians in need of emergency consular assistance to call or email the emergency response centre of Global Affairs Canada in Ottawa.

A teacher who is living with his pregnant Canadian wife and child in a city that is the epicentre of China's coronavirus outbreak had been hoping to leave the country on a British flight.

Tom Williams is hoping to get his wife, Lauren, who is about 35 weeks pregnant, out of Wuhan, the Hubei city that has been essentially locked down with the emergence of the disease. The couple also has a two-and-a-half-year-old son, James, who is Canadian.

Williams is a British expat and his wife and son are from British Columbia.

“We're just currently waiting to hear confirmation whether we've got space on the British flight,” Williams told The Canadian Press in a FaceTime interview from China on Wednesday, before Champagne's announcement.

The family received a call from officials in Ottawa earlier this week, who asked permission to share his wife's file with the British Embassy, he said.

“We have some stuff laid out in case it's a last-minute departure.”

At least 250 Canadians have registered with Global Affairs Canada to say they are in Wuhan, said Champagne, who added that officials are trying to contact everyone to assess their needs.

Williams said looking at options isn't really helping people on the ground, although he understands that Canada doesn't have a diplomatic presence in Wuhan, a city of 11 million. Canadian offices in Beijing and Shanghai are closed until Sunday for the Lunar New Year holiday.

“We're just a little anxious and hoping for some answers pretty soon,” said Williams, who added that he and his family are “still healthy and still OK.”

The family went out during the day Wednesday and the streets were “very quiet,” he said. They take their temperatures whenever they enter and leave their apartment complex.

“He's a little bit clingy, but we're doing our best with train sets and different things. Trying to keep him entertained.”

Canadian Wayne Duplessis, who teaches in China, said he and his family registered with the emergency response centre in Ottawa to know what help may be available in Wuhan.

But Duplessis, who is originally from Espanola, Ont., said he is not looking to leave.

Most people he knows are taking the situation in stride, although he said there is “a certain resignation” and “despair.” Duplessis and his family members take their temperatures every morning at breakfast.

More restrictions have been placed on cars and some people are worried those might affect day-to-day activities such as getting groceries, he said.

From his 28th-floor balcony, Duplessis said he could see the highway, usually buzzing with activity, was empty.

“The IKEA mall across the street is empty, which is too bad. There's great lunches there,” he said.

“An IKEA meatball lunch would be nice right now.”

- with files from the Associated Press