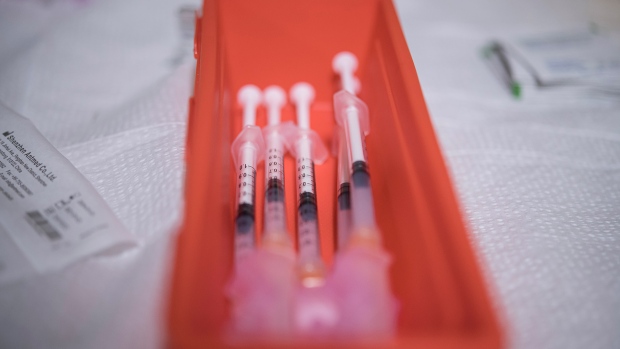 Doses of the Moderna COVID-19 vaccine are prepared at a one-day pop-up vaccination clinic at the Muslim Neighbour Nexus Mosque, in Mississauga, Ont., on Thursday, April 29, 2021. THE CANADIAN PRESS/Christopher Katsarov

Prime Minister Justin Trudeau says the only way Canada brings the pandemic to a close is for everyone to get vaccinated as soon as possible, amid a flurry of fear and frustration over new advice from the National Advisory Committee on Immunization.

NACI said Monday that Canadians who aren't at high risk of COVID-19 may choose to wait until they can get a shot of either Pfizer-BioNTech or Moderna, because they don't carry the remote risk of a new blood-clotting syndrome.

NACI said Canadians under 30 shouldn't be offered AstraZeneca or Johnson & Johnson at all, because their risk of severe illness or death from COVID is outweighed by the potential risk of the syndrome known as vaccine-induced thrombotic thrombocytopenia, or VITT.

That directly contradicts long-standing advice from Health Canada to get the first vaccine you're offered, and Trudeau said Tuesday that advice still stands.

“On a personal level, I am extremely pleased that I got the AstraZeneca vaccine a number of weeks ago,” he said.

Chief Public Health Officer Dr. Theresa Tam said she understands that people may be frustrated or angry about changing advice but she said things change as science changes. She said there are different risk-benefit conclusions based on individual and community situations.

“But again, I'll reiterate from our chief medical officers that the AstraZeneca vaccine deployed in the middle of a third wave has saved lives and prevented serious illnesses,” she said.

Some of the debate may not matter much. Canada is supposed to get up to 36 million doses of the mRNA vaccines in the next two months -24.2 million Pfizer and between 10 million and 12 million from Moderna.

Comparatively, Procurement Minister Anita Anand said Tuesday there are only deliveries of about 1.6 million doses of AstraZeneca expected, though negotiations to get additional doses from a U.S. supply of that vaccine are ongoing.

There are no shipments of J&J even tentatively scheduled.

The first 300,000 doses of J&J arrived last week but are on hold because they were partly made at a Maryland facility with numerous safety violations. Health Canada is trying to verify the doses meet required standards.

Trudeau said Moderna's next shipment of one million doses is now arriving in Canada Wednesday, a week ahead of schedule.

Canada expects to get 92 million doses of Pfizer and Moderna by the end of September, 18 million more than it needs to give two doses to every Canadian.

However, NACI's advice did not land well among many medical professionals this week.

“It pains me to say this but it's past time to take NACI's recommendations with a grain of salt,” emergency physician Dr. Brian Goldman said on Twitter.

“For the good of your health, DO NOT be choosy when it comes to #covidvaccines. Take the first one you're offered.”

“I'm worried,” he said. “We need to get a lot of Canadians immunized in order to get over this pandemic. We really need Canadians to get vaccinated as quickly as possible.”

He said when you weigh the risks that come with COVID-19 against the risks of any of the vaccines Canada has authorized, preventing the virus is always the better choice.

Emberley said he got the AstraZeneca vaccine himself three weeks ago and has no regrets.

“Based on everything I know right now I would not make a different decision,” he said.

He said he's also worried that this will make Canadians who already got AstraZeneca afraid to get their second dose. Of the 1.7 million people who did receive it as of April 24, only a few thousand got their second dose so far.

There are studies underway about mixing two different vaccines, with the first results expected later this month. NACI is expected to provide advice on second doses after those results.

“What Canadians need is clear, concise, and constant communications when it comes to vaccine use,” health critic Michelle Rempel Garner and procurement critic Pierre Paul-Hus said in a joint written statement.

The risk of VITT is estimated to be anywhere from one case in 100,000 doses given, to one in 250,000. But the syndrome is so new, there is still little known about what the real risk is, why it is happening and who might be most likely to develop clots.

Seven cases have been reported to date in Canada, all in people who received the AstraZeneca vaccine. Approximately 1.7 million people have received at least one dose of in Canada as of April 24.

As of April 23, 17 cases of VITT had been confirmed out of more than eight-million doses of the J&J vaccine administered in the United States. No doses of J&J have been used in Canada yet.