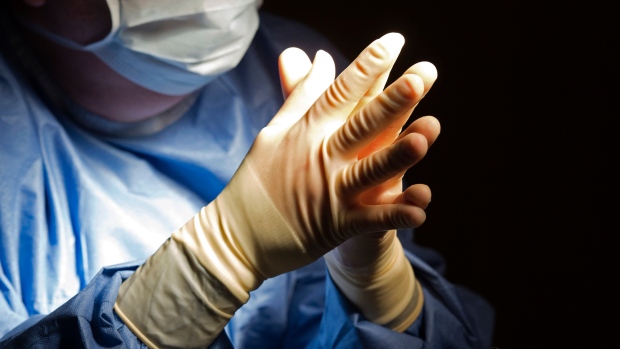 A doctor prepares for a surgical procedure at a hospital in Washington on June 28, 2016. THE CANADIAN PRESS/AP, Molly Riley

EDMONTON - A health-care advocacy group says an increase in Canadians travelling to other countries for medical treatment reflects how inefficiently and ineffectively provinces have organized their surgical care.

Steven Staples with the Canadian Health Coalition says he's not surprised that the Nordorthopaedics Clinic in Kaunas, Lithuania, has reported a 50 per cent increase in Canadian patients during the COVID-19 pandemic.

“You can understand people wanting to do everything they can to get treatment,” said Staples, who is the coalition's national director of policy and advocacy.

“Increasingly people can't get access to the public health care system. We know that it's women and people in marginalized or racialized communities who don't have the money to buy private care, while people who are wealthy can get necessary health care.”

The founder of a Vancouver-based company that arranges private surgeries for Canadians in-country and elsewhere said it's the busiest it's been in 20 years of operation.

Baker said he has set up about 450 private surgeries in the last 12 months.

“I talked to a man last week. He is 85 years old from Alberta. He's just been put on a three-year wait for a hip replacement now. He could be dead before his name comes up for that surgery.

Data from Ontario Health shows about 45,000 fewer surgeries were performed on patients with health concerns not related to cancer from late March to early April 2020. That's 90 per cent less surgeries compared with the same four-week period in 2019.

The Saskatchewan Health Authority reported that during the province's fourth wave last month, more than 30,000 people remained on a waiting list for surgeries. British Columbia's Ministry of Health postponed 1,940 scheduled, non-urgent surgeries from Sept. 5 to Oct. 16.

Consulting firm Deloitte calculated that $1.3 billion will be needed to return wait times for those procedures to pre-pandemic levels by next June.

“There is a crisis in the system,” Staples said.

“There's lots of things that we can do, including providing conditional funding for various innovations. Until then, private health care is creeping in and only people who have the means can jump the queue.”

Staples and Andrew Longhurst, a research associate with the Canadian Centre for Policy Alternatives, say Canada can do three things to reduce the backlog and efficiently provide support to vulnerable populations.

“We need to get serious about managing the pandemic in a smarter way,” said Longhurst, who has authored multiple reports on Canadian health care.

“We might be able to end it if we take the airborne nature of COVID seriously” by increasing testing and tracing, he said.

“Provinces that have not done everything they can to promote vaccinations and have more people going into emergency wards are making the problem worse,” Staples added.

“Secondly, we need to end the crisis in the health-care workforce,” Longhurst said.

“We need to support front-line health-care workers, nurses, doctors ... people who are burning out and leaving the workforce.”

“Many researchers and health systems leaders have been saying for years we haven't taken a lot of the system improvement initiatives seriously in a sustained ... and systematic way,” Longhurst said.

For example, hip and knee surgeries, the greatest number of operations done in most provinces, can be streamlined more efficiently, Longhurst suggested.

“In many health regions across the country, the referral process goes from somebody's family doctor directly to an individual surgeon's wait list,” he said.

Quick assessments by other qualified health-care professionals like physiotherapists could support those patients, who a surgeon would later find didn't need to be on a wait list in the first place.

“This is the moment to do it ... when we know that we can no longer afford to have wave after wave,” Longhurst said.

“The answer is for our government to make sure that our public system has the resources to treat everybody fairly and to get the treatment they need as soon as possible,” Staples said.