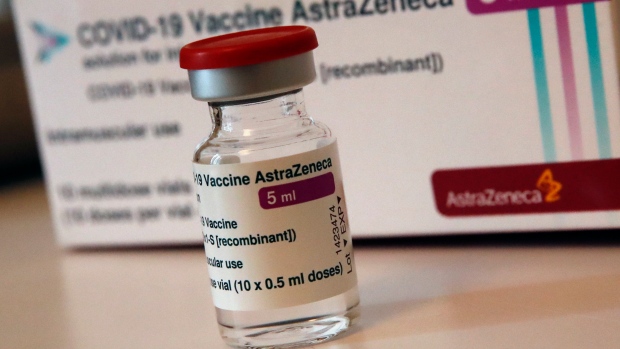 A vial of AstraZeneca vaccine is pictured in a pharmacy in Boulogne Billancourt, outside Paris, Monday, March 15, 2021. (AP Photo/Christophe Ena)

The federal government is expecting around 1.5 million doses of the Oxford-AstraZeneca vaccine from the United States today.

The vaccines are expected to arrive by truck and represent the first to come from south of the border.

Provincial governments decide on their own how to use a vaccine, but Dr. Howard Njoo, Canada's deputy chief medical officer of health, says all provinces and territories have agreed to suspend the use of the vaccine for those under 55, pending the results of further study.

The province's are acting on an advisory committee's concerns about a possible link between the shot and rare blood clots.

She says people who received the AstraZeneca vaccine should look for symptoms such as shortness of breath, chest pain, leg swelling, persistent abdominal pain, sudden onset of severe or persistent headache or blurred vision and skin bruising elsewhere than the site of vaccination, developing four to 20 days after getting the shot.