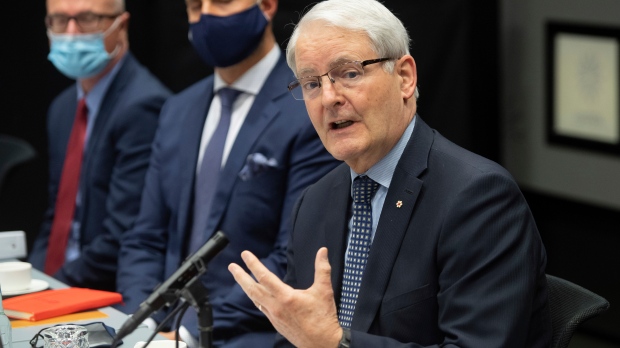 Canadian Foreign Minister Marc Garneau, speaks during a meeting with US Secretary of State Antony Blinken, at the Harpa Concert Hall in Reykjavik, Iceland, Wednesday, May 19, 2021, on the sidelines of the Arctic Council Ministerial summit. (Saul Loeb/Pool Photo via AP)

In a statement posted on his Twitter account Thursday night, Garneau said Ottawa urges Israelis and Palestinians to bring down the temperature.

“We are appalled by the tragic loss of life and urge all sides to further de-escalate tensions,” he said.

Garneau said Canada is calling on Israelis and Palestinians for a renewed commitment to peace and is standing ready to support efforts toward a two-state solution.

At least 230 Palestinians were killed, including 65 children and 39 women, with 1,710 people wounded, according to the Gaza Health Ministry.

Twelve people in Israel, including a 5-year-old boy and 16-year-old girl, were killed.

Aiman Shakra, president of the Palestinian Canadian Congress, which is a national umbrella organization for Palestinian-Canadian groups, said the ceasefire is a relief for the community in Canada.

“We are relieved but we stay cautious to say (the truce) would hold and lead to recognition of the Palestinians' rights to offer them safety and justice,” he said in an interview with The Canadian Press.

Shakra said his organization has sent letters to Prime Minister Justin Trudeau, Garneau and opposition leaders to express the disappointment and dissatisfaction with the federal government's policies and explain how Canada has failed to protect the human rights of Palestinians.

“The government says it supports a two-state solution,” he said, “yet the government's action, even statements, try to give full support to the Israeli government.”

Shimon Koffler Fogel, the president of the Centre for Israel and Jewish Affairs, which is a Canadian Jewish advocacy group, said his organization is relieved the missile attacks launched by Hamas have abated, and that the threat to further loss of life has greatly diminished.

“The ceasefire is an important milestone and any development that results in a suspension of hostilities has to be welcomed,” he said in a statement.

“But the situation remains fragile and sustaining relative calm will demand that all stakeholders reflect responsible and considered decisions and actions.”

Fogel said Canada must engage and encourage Palestinians to appreciate that support for Hamas translates into further suffering for Palestinians and Israelis alike.

“Like all countries committed to peace, Canada is limited to playing a supportive and perhaps facilitative role,” he said. “Only the direct parties to the conflict can move things forward.”

Thousands gathered across Canada in pro-Palestinian protests over the last two weeks. Last weekend, large demonstrations broke out in Toronto, Montreal, Ottawa and Vancouver. More rallies and vigils were held during the week.

In Toronto, a group of activists protested Friday outside the Israeli consulate and covered the building's steps with red paint.

Rabbi David Mivasair, a member of Independent Jewish Voices, said in a news release the death and destruction inflicted by Israel in Gaza cannot be washed away.

“The ceasefire doesn't end the injustice and oppression,” he said.

Jewish human rights organization B'nai Brith Canada called out the rise of antisemitism in the wake of recent fighting between Israel and Hamas.

The organization said the antisemitic assaults recorded so far this month easily surpasses the total of all assaults last year.

“This past week has been a shocking and harrowing experience for the Jewish community,” said Michael Mostyn, chief executive officer of B'nai Brith Canada in a news release.

“For the first time in their lives, many have had their sense of safety and security in Canada seriously challenged.”

The fighting between Israel and Hamas erupted on May 10, when Hamas militants in Gaza Strip fired long-range rockets toward Jerusalem.

The barrage came after days of clashes between Palestinian protesters and Israeli police at the Al-Aqsa Mosque, the third holiest site in Islam, which is built on a hilltop site sacred to Jews in the holy city.

Tensions were fuelled by a lengthy legal battle waged by Israeli settlers to take over properties and plan for the removal of dozens of Palestinians from the Sheikh Jarrah neighbourhood of East Jerusalem.

The competing claims to Jerusalem lie at the heart of the Israeli-Palestinian conflict and have repeatedly triggered bouts of violence in the past.

On Friday, Palestinians rallied by the thousands in the West Bank, Gaza and Jerusalem after the ceasefire took effect, with many viewing it as a costly but clear victory for Hamas.

Protesters also clashed with Israeli troops in parts of the occupied West Bank, which has seen violent demonstrations in recent days linked to Jerusalem and Gaza. Thousands also took to the streets of Gaza as the ceasefire took hold at 2 a.m.

Celebrations also broke out overnight in East Jerusalem, Gaza and across the occupied West Bank. Israel captured all three territories in the 1967 war and the Palestinians want them for their future state.

This report by The Canadian Press was first published May 21, 2021.