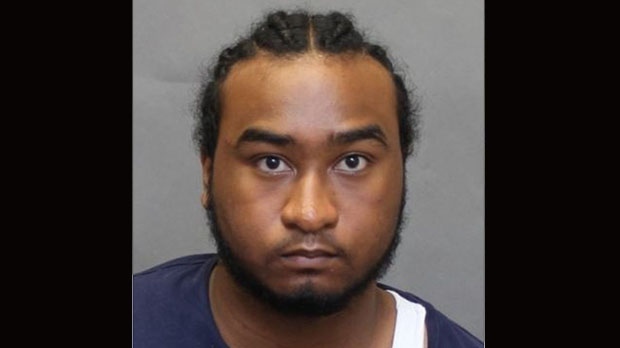 Joseph Boachie is pictured in this photo released by Toronto police.

Toronto police have issued a Canada-wide warrant for a suspect wanted in connection with a double shooting in the city’s downtown core earlier this month.

Officers were called to the area of Yonge Street and Gerrard Street West at around 1:30 a.m. on April 3 for a reported shooting.

When officers arrived on scene they located a woman with a gunshot wound to the leg and a man suffering from multiple gunshot wounds.

They were both taken to hospital for treatment.

Police said they have now identified the suspect in the shooting as 22-year-old Toronto resident Joseph Boachie.

He is facing a dozen charges, including aggravated assault, assault with a weapon, and possession of a weapon for a dangerous purpose.

Investigators also released a photo of the suspect on Monday and are asking anyone who spots Boachie not to approach him but to call 9-1-1 immediately.

The suspect, police said, is considered armed and dangerous.