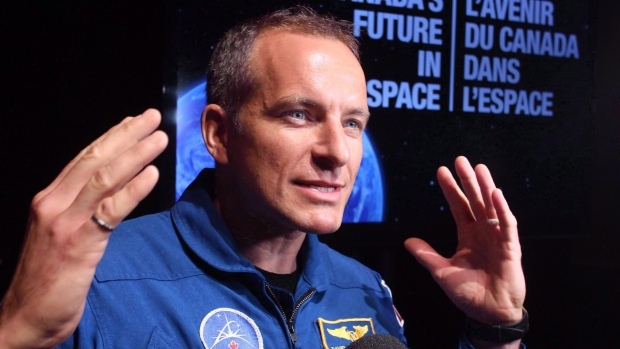 Canadian astronaut David Saint-Jacques speaks to reporters during a news conference in Ottawa on June 2, 2015. THE CANADIAN PRESS/Fred Chartrand

MONTREAL - Canadian astronaut David Saint-Jacques is bracing for some tense moments during next Monday's launch of the Soyuz rocket that will send him and two others to the International Space Station.

Saint Jacques spoke to reporters today from the launch site in Kazakhstan where he's in quarantine. He said the most dangerous part of the six-month mission is the 10-minute Soyuz launch and the six hours that follow before docking.

He said half of the last two-and-half years of training was dedicated to his role as Soyuz co-pilot for the trip to the space station.

Saint-Jacques, 48, said once at the space station he'll be able to focus on work and life aboard the outpost.

The Canadian astronaut's first space voyage, with NASA astronaut Anne McClain and Oleg Kononenkoof of the Russian space agency Roscosmos, was originally scheduled to launch Dec. 20. It was moved ahead after Russian authorities concluded their investigation into the failed launch.