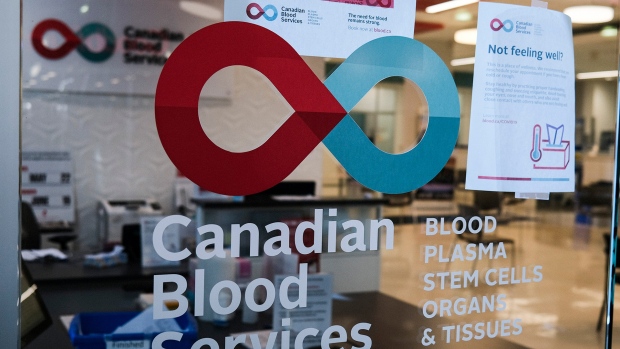 A blood donor clinic pictured at a shopping mall in Calgary, Alta., Friday, March 27, 2020. Scientists have been poring over COVID-19 data in an effort to better understand the still unknown aspects of the virus. The key to unlocking some of those mysteries could be in our blood. Canadian Blood Services is reassuring the public that donated blood from those who have had COVID-19 or from those receiving the vaccine is perfectly safe. THE CANADIAN PRESS/Jeff McIntosh

OTTAWA -- An end to the ban on gay and bisexual men from donating blood -- promised by Prime Minister Justin Trudeau in 2015 -- is set to be recommended within weeks in favour of new screening criteria based on sexual history and behaviour.

"Sexual behaviour, not sexual orientation, determines risk of sexual transmission of HIV. Our proposed criteria will aim to precisely and reliably identify those who may have a transfusion-transmissible infection, especially in the window period, regardless of gender or sexual orientation," said Catherine Lewis, a spokeswoman for Canadian Blood Services, who declined to comment on the specifics of the recommendation.

The blood service says it is preparing to cite evidence from countries which do not ask donors such questions, as well as research on risk of HIV transmission, in its submission to Health Canada within the next six weeks.

The way the screening is currently set up lacks nuance, and also doesn't address people who are transgender, two-spirit, or otherwise don't confirm to binary genders, said Nathan Lachowsky, one of several researchers whose work will inform Canadian Blood Services' application.

"There's a way in which to create solutions that are gender neutral, meaning it's not about who you are in terms of your sex and gender," said Lachowsky, an assistant professor in the School of Public Health and Social Policy at University of Victoria. "That simplifies the system and makes it more accessible to more Canadians."

As it stands now in Canada, a gay man who has had sex with one partner in the last three months cannot give blood, but a straight man can, no matter how many partners he has had sex with during the same time frame.

While Canadian Blood Services tests all of its donated blood products for a whole host of diseases, including HIV, the agency says no test is 100 per cent accurate.

That's why eligibility screening is such an important part of limiting the risk to blood recipients, according to the agency's website.

Lachowsky, who did not comment on the specific questions that will be included in the Canadian proposal, said a neutral approach makes much more sense than basing restrictions on gender and sexuality.

"That means that we're increasing, in my mind, the safety of the blood system broadly," he said.

Trudeau has come under pressure from MPs and the LGBTQ community to scrap questions for donors aimed at gay men. During the election in September, Trudeau promised a change was imminent.

But Randall Garrison, the NDP spokesperson on LGBTQ affairs, said the change is "long overdue." He said many countries, including Italy, have no such criteria "without any problems." The MP has been pressing ministers to end the gay and bisexual blood-donation ban for almost 10 years, and said he did not want further delays by Health Canada to halt an end to the ban.

"I have been calling for a shift to risk-based criteria for a decade. I have argued there are two things wrong (with this policy): restricting the blood supply and promoting homophobia," he said. "I don't want to see inordinate delay now."

Health Canada, which regulates the blood service, can only change the criteria if evidence is presented showing this will not increase risk.

Canadian Blood Services has been analyzing available research to find the safest way to make the change. This includes an MSM (men who have sex with men) research program and a 2020 For the Assessment of Individualised Risk (FAIR) report from the U.K. about blood donation and risk.

"The safety of Canada's blood supply will always be paramount for us. We have more evidence than ever before, stemming from the MSM Research Program, international data and Canada-specific risk modelling, that indicates sexual behaviour-based screening will not introduce risk to the blood supply," Lewis said.

Canada introduced a lifetime ban for gay men in 1992. In 2013 it allowed blood to be accepted from a man who abstained from sex with another man for at least five years.

The waiting period then dropped to one year, and became three months in 2019.

Once Canadian Blood Services submits its application to change the screening requirements, it will be up to Health Canada to approve it. The process, which often involves requests for more detailed information, could take several months to a year before the changes take effect.

Eric Duncan, the first openly gay Conservative MP to be elected, said the prime minister should make implementing the blood service's recommendation "a priority." He accused Trudeau of having a "lack of urgency," despite first promising a change in 2015.

Duncan, who has campaigned for an end to the gay blood ban for years, said he will keep the pressure on when Parliament returns.

"When is this change going to be made? It could be months or years to implement this," he said. "The lack of urgency among the key players is frustrating."

NDP leader Jagmeet Singh said Tuesday that the change was "a really important victory" for activists who have campaigned for an end to the "homophobic practice."

Speaking in Nunavut at a news conference, Singh said the blood ban "perpetuates the idea that people are dangerous or less safe" and that there is "no basis in evidence" for this.

"This is a really important moment," he said.