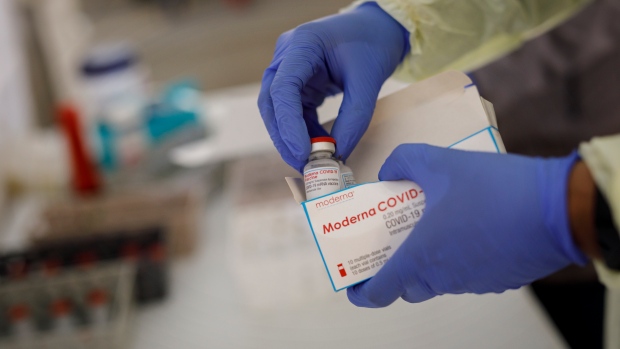 Healthcare workers from Women's College Hospital prepare doses of the Moderna COVID-19 vaccine at a pop-up vaccine clinic in Toronto's Jane and Finch neighbourhood, in the M3N postal code, on Saturday, April 17, 2021. THE CANADIAN PRESS/Cole Burston

The Canadian co-founder of Moderna says he's proud to have won a prestigious European science award that counts esteemed scientists such as Stephen Hawking among its previous recipients.

Derrick Rossi, who was born in Toronto and now lives in the Boston area, won the 2021 Princess of Asturia award for his work on the mRNA technology that led to the creation of COVID-19 vaccines.

“It's a great honour and what makes it a really great honour for me is that I've looked at past recipients of this award and it's a very, very distinguished company to be amongst,” said Rossi.

“It's humbling and exciting.”

He won alongside multiple other researchers based in Hungary, Germany, the U.K. and the U.S who's work also contributed to designing the vaccine.

The panel for the award calls them leading figures in one of the most outstanding feats in the history of science for leading the way to developing vaccines in an extraordinarily short space of time.

The COVID-19 vaccines by Pfizer and Moderna both use mRNA technology, and it's the first time the technology has been used for a vaccine.

Rossi, who is no longer with Moderna and is working on multiple other initiatives, says it was always his goal to have his work affect human health in a positive way.

“Of course you want to see your work make an impact,” said Rossi.

“It's satisfying, but did I imagine that it would happen in a global pandemic and Moderna would become a household name ... No I didn't imagine that, but I always believed mRNA was going to make an impact.”

He said he's continuing to try and improve people's lives through science, and has now turned much of his attention to combatting the effects of venomous snake bites in poorer countries.

Rossi said snake bites kill more than 100,000 people per year and maim hundreds of thousands of more, and called the issue a massive global health crisis.