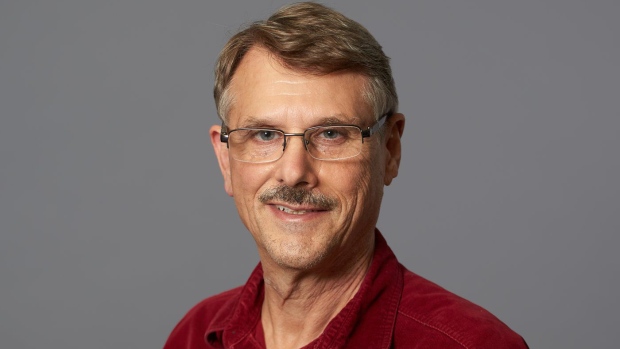 A Hamilton researcher has won an international prize for work that jurors say makes him the "father of evidence-based medicine." Dr. Gordon Guyatt, distinguished professor of Health Research Methods, Evidence and Impact at McMaster University, is seen in an undated handout photo. THE CANADIAN PRESS/HO-McMaster University, Jon Evans, *MANDATORY CREDIT*

A Hamilton researcher has won an international prize for work that jurors say makes him the “father of evidence-based medicine.”

The Berlin-based Einstein Foundation Award named Dr. Gordon Guyatt the winner of a (euro)200,000 prize - worth about C$280,000 - for his pioneering work promoting quality in medical research leading to better patient care.

Guyatt, distinguished professor of Health Research Methods, Evidence and Impact at McMaster University, develops guidelines that help doctors incorporate high-quality, up-to-date research into their treatment decisions so they don't have to rely solely on what a textbook says or the way something has always been done in the past.

“Historically, physicians received no training whatsoever in reading and understanding the medical literature and original studies,” Guyatt, 69, said from Hamilton.

Unlike many other research prizes, the Einstein Foundation Award recognizes the “importance of doing research properly rather than just getting flashy results,” jury vice-president Dorothy Bishop said at a virtual news conference in advance of Thursday's announcement in Berlin.

The jury, made up of 15 international scientists, chose one individual and one institution that “have made scientific results globally more trustworthy and useful,” said award secretary Ulrich Dirnagl.

Guyatt has “transformed the quality of clinical research in the health sciences by influencing how research is done and how evidence is transformed into practice,” said Bishop, also an emeritus professor of developmental neuropsychology at the University of Oxford.

“He's the father, I would say, of evidence-based medicine.”

Guyatt credits his mentor, the late Dr. David Sackett, as the real founder.

Guyatt took Sackett's course when he was an internal medicine resident and it changed the course of his career. He said that's just one example of the “happenstance and phenomenal good luck” that led up to winning the Einstein award.

In fact, Guyatt didn't plan to be a doctor or researcher at all.

But during his undergrad years Guyatt realized he didn't like the career options available to him and decided he wanted to be a doctor.

“At the time there was one medical school in the country where they let people in without a science background,” he said.

“I applied to that institution and got in. And it turned out to be McMaster University in Hamilton, where I grew up.”

Sackett taught him about evaluating and applying scientific findings to make decisions at the patient's bedside.

“It certainly felt to me like this was a profoundly different way of practising medicine,” Guyatt said.

High-quality findings that translate into patient care often come from randomized clinical trials, but clinicians need to know how to assess the quality of the methodology and results - something not all physicians have time or the ability to do, Guyatt said.

Systematic reviews of many randomized clinical trials can go a step further. But what's most helpful is transforming high-quality research results into evidence-based guidelines that doctors can easily turn to, he said.

The COVID-19 pandemic illustrated the importance of those kinds of guidelines, Guyatt said. The quick turnaround of safe and effective vaccines and treatments in response to an unknown virus has been a “triumph” of evidence-based medicine, he said.

“One of the things I've done that I'm most happy with is helping the WHO make their trustworthy recommendations,” he said.

He's been working with the World Health Organization on establishing evidence-based treatment guidelines - including when doctors should prescribe the antiviral drug combination nirmatrelvir-ritonavir, also known under the brand name Paxlovid, to COVID-19 patients.

Using an online decision-making tool on the WHO's website, doctors can click through to get the recommendation that applies to their patient, including factors such as their risk of becoming seriously ill with COVID-19. They can also find an assessment of the quality of the studies that were used to come to those conclusions, as well as graphics to help in discussing the decision with patients.

Shared decision-making is another hallmark of evidence-based medicine, Guyatt said, because the best way to use the medical evidence sometimes depends on the patient's values and preferences.

“There are some decisions that are slam dunks. The benefits so clearly outweigh the downsides and vice versa,” he said.

But in other cases, it's not as clear. The evidence may show that a patient with cancer can expect to live another three months with chemotherapy, but those three months won't be pleasant, he said. In that case, the right course of action depends on the value the patient places on living longer versus quality of life.

Guyatt wasn't able to make it to Berlin to accept his Einstein award in person on Thursday, but said he is “honoured, grateful, and as usual, thankful for my extraordinary good luck.”

This report by The Canadian Press was first published Dec. 1, 2022.

This report has been produced with the financial assistance of the Canadian Medical Association. It has no say in editorial choices.