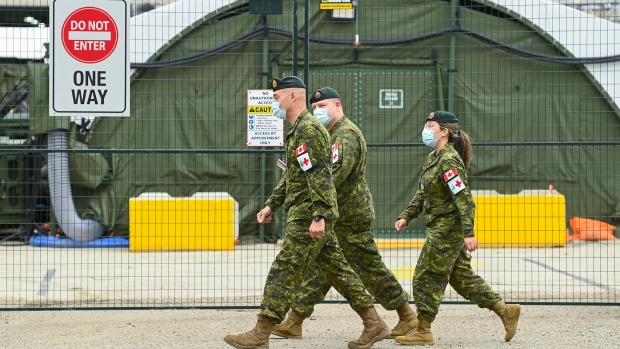 Military health-care personnel are on site at a mobile health unit at Sunnybrook Hospital during the COVID-19 pandemic in Toronto on Friday, April 30, 2021. THE CANADIAN PRESS/Nathan Denette

A military task force that includes critical care nurses has been begun work at Toronto’s Sunnybrook Health Sciences Centre, marking a new chapter in what has already been a devastating third wave of the COVID-19 pandemic.

A total of 58 Canadian Forces members have been deployed to Sunnybrook to provide support in its ICU unit as well as the temporary field hospital that has been set up on its grounds.

The troops arrived at the hospital on Tuesday but today marks the first day that they are involved directly in patient care.

“The type of tasks that they will be doing specifically includes triage, patient care and patient management and the goal is to integrate as closely as possible and be able to assist the Sunnybrook staff where they deem it is needed the most,” Lieutenant Colonel Franz Kirk, who is leading the task force, told reporters on Friday afternoon. “I would say it is two-thirds in the tent and one third working in intensive care.”

The federal government agreed to deploy military resources in Toronto earlier this week following a request by the Ford government.

In total, the Canadian Forces plans to deploy nine ICU nurses in the city as well as three multipurpose medical assistance teams that can be rotated in and out as needed.

Public Safety Minister Bill Blair also said earlier this week that 62 health professionals from the federal government have volunteered to help in Ontario hospitals, including doctors and nurses who work in prisons or for Indigenous Services Canada.

“The fact we can come in here with a couple days notice, had a couple days of orientation and training and now are at an operational capability to have hands on patients effective today I think is pretty impressive and speaks to the reputation and the professionalism of the Canadian Forces,” Kirk said on Friday. “This is a very medically focused mission and the way that we train it is within scope of practice to very quickly and seamlessly integrate.”

According to the latest data released by the Ministry of Health today, there are 2,201 people infected with COVID-19 who are receiving treatment at Ontario hospitals, including 883 in the ICU.

That accounts for more than a third of all available ICU beds.

The field hospital set up outside Sunnybrook is the first such facility to be made operational, though a similar one in Hamilton could begin accepting patients soon.

The Sunnybrook facility currently has eight patients that have been transferred from other GTA hospitals dealing with capacity issues.

Dr. Steve Shadowitz, who is a physician in the field hospital, told reporters on Friday that the intent is for patients to receive the exact same level of care inside the temporary facility as they would at any hospital.

He said that the Canadian Forces members on the ground will play an integral role in providing that care, while also giving overburdened doctors and nurses a bit of a moral boost.

“I think it has been great for morale to have people come,” he said. “For those of us who work in the hospital sector it has been a long road. We have been at this since February, 2020 obviously through different waves but it hasn’t really stopped and you know particularly for my nursing colleagues, who have been working the hardest quite frankly, and to be able to have this support at this time while we we are in the middle of a devastating third wave has been a big morale boost I think.”