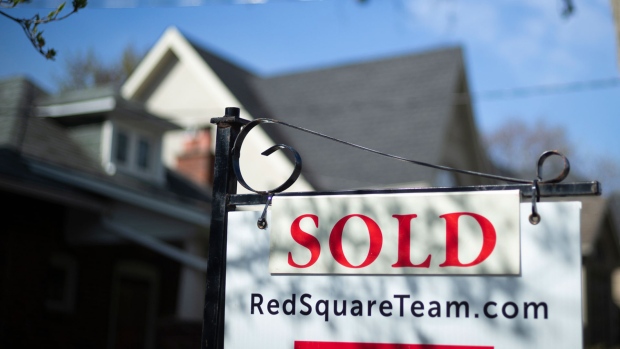 A real estate sold sign is shown in a Toronto west end neighbourhood May 17, 2020. The Toronto Regional Real Estate Board says home sales in the Greater Toronto Area posted a record for August as they rose 40.3 per cent compared with a year ago. THE CANADIAN PRESS/Graeme Roy

TORONTO -- Canada Mortgage and Housing Corp. says the country's housing sector moved from a moderate to high degree of vulnerability during the second quarter, with Toronto, Ottawa and Montreal among the markets shouldering the most risks.

The federal housing agency attributed the escalation in vulnerability to price acceleration and overvaluations across the country and said the shift was largely a reflection of intensified and persistent imbalances in several local housing markets across Ontario and Eastern Canada.

"Even though we've seen a little bit of a moderation in some of the housing market statistics in the third quarter, when looking at the second quarter results ... activity was still much stronger than even it is today," said Bob Duggan, CMHC's chief economist.

CMHC's second-quarter assessment of the Canadian market found moderate degrees of vulnerability, when it examined the country's risks of overheating, price acceleration and overvaluation.

In the two prior quarters, Canada's housing market landed a "moderate" degree of vulnerability, but Duggan warned of pressure from rural areas like Ontario's cottage country and the Niagara, Bancroft and North Bay regions, which don't receive vulnerability ratings but contribute to the national analysis.

All of those markets were ranked high in the prior quarter, except for Montreal, which was previously assessed as moderate and is seeing overvaluation becoming a more pressing issue.

CMHC kept Victoria, Edmonton and Calgary at the moderate level they were at before, while Vancouver, Saskatoon, Regina, Winnipeg and Quebec City were assessed as having low degrees of vulnerability.

The low ranking was new for Vancouver, which was previously said to have a moderate vulnerability level.