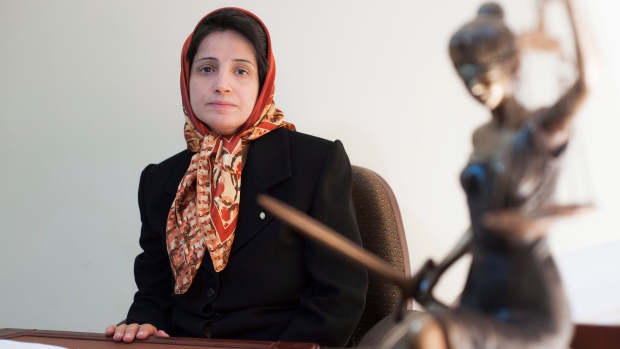 OTTAWA - The Canadian legal team for an imprisoned Iranian human-rights lawyer is calling for federal sanctions and United Nations intervention as she wages a life-threatening hunger strike entering its 29th day.

Nasrin Sotoudeh was hospitalized briefly on Monday in Tehran but has since been returned to the women's ward of the notorious Evin Prison, where she has been held since June 2018, says Yonah Diamond, one of her Montreal-based lawyers.

Sotoudeh, 57, has lost at least 15 pounds and is suffering from unstable blood pressure, memory loss, migraines, vomiting and dehydration, and Diamond says that while she is determined to carry on her fight, her life is very much at risk.

Sotoudeh's legal team is being led by former Canadian justice minister Irwin Cotler, the founder of the Raoul Wallenberg Centre for Human Rights in Montreal.

Cotler calls Sotoudeh the “Mandela of Iran” because of her outspoken advocacy for female inmates, young people and journalists and her opposition to the death penalty.

She was sentenced to 38 years in prison and 148 lashes in March 2019, a sentence she continues to serve despite Iran's release of scores of prisoners due to overcrowded prisons that are now breeding grounds for COVID-19.

This report by The Canadian Press was first published Sept. 8, 2020.