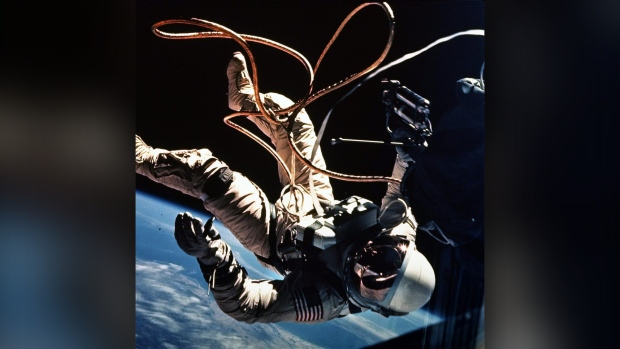 Astronaut Ed White moves away from the Gemini 4 capsule in this 1965 file photo. White, the first American spacewalker, lost a spare glove when he went outside for the first time. From that time on, astronauts have accidentally added some of the more unusual items to the 100,000 pieces of space trash that circle Earth. THE CANADIAN PRESS/AP/NASA, FILE

OTTAWA - The Canadian military is looking for help taking out the trash in space.

Over the last two years, the military's Innovation for Defence Excellence and Security program has awarded 16 contracts totalling $4.8 million to Canadian companies and university researchers to find ways to identify some of the millions of pieces of junk orbiting the Earth.

Now it is preparing to award more contracts, looking for companies that can track the smallest bits of space junk, as well as solutions to pulling space waste of all sizes out of Earth's orbit.

“The hazards posed by debris collisions include erosion to hulls, solar panels and optics,” reads a request for proposals issued by the department's innovation science program last summer.

It can also cause the junk in space to break up even more, compounding the space trash issue. The potential consequences are serious: it could cause the total loss of a space vehicle and hurt, or even kill, the astronauts inside them.

“Space debris will grow as the number of human-made objects in Earth orbits increase over time,” the request says.

The request for proposals closed in September and a spokeswoman for the military says contracts will be awarded this winter. The contracts are worth up to $200,000 each, for a maximum of six months.

The European Space Agency estimates more than 129 million pieces of garbage are circling the Earth, pieces of old satellites, broken up rockets, and castoffs from human missions to space.

The Department of National Defence is mandated to protect and defend Canada's space capabilities, including the satellites it relies on for communications, surveillance and navigation.

A raisin-sized remnant from an old satellite or a rocket may be small but when it's travelling at speeds of up to 28,000 kilometres per hour as it circles the planet, it can cause significant damage to space craft or satellites.

The Canadian military says current removal systems are ineffective and nobody has yet found a way to keep track of the smallest pieces of space debris.