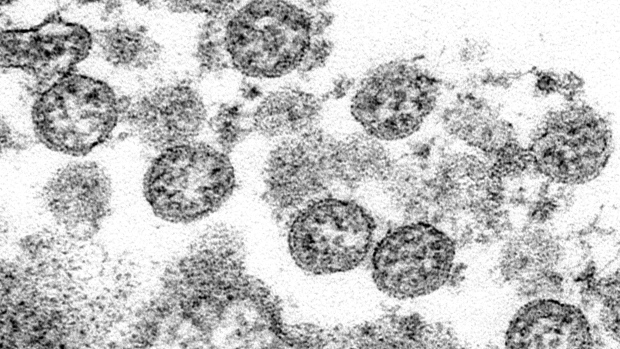 This 2020 electron microscope made available by the U.S. Centers for Disease Control and Prevention image shows the spherical coronavirus particles from the first U.S. case of COVID-19. The Canadian Paediatric Society is closely monitoring reports of an inflammatory syndrome among some kids also diagnosed with COVID-19.THE CANADIAN PRESS/AP-C.S. Goldsmith, A. Tamin/ CDC via AP

TORONTO - The Canadian Paediatric Society is closely monitoring reports that COVID-19 may be linked to a strange inflammatory syndrome in some children.

The society says it expects to issue advice to clinicians late this week or early next about symptoms similar to Kawasaki disease, although a COVID-19 connection has not been established.

A broad study is underway with the Canadian Paediatric Surveillance Program to detect how, and how many, children are being severely affected by COVID-19. A spokeswoman says that would include any cases that suggest Kawasaki disease, the primary cause of acquired heart disease among children.

Symptoms of Kawasaki disease include dark red rashes that come and go, high fever, and swelling in the palms and in soles of the feet. Patients can also develop lymph nodes on the neck, and inflammatory markers in the blood.

An infectious diseases pediatrician at Sainte-Justine Hospital in Montreal says COVID-19 is believed to be a factor in more than a dozen cases of Kawasaki-like illness there.

Dr. Fatima Kakkar says the cases emerged over the last three to four weeks and that it's unusual to see so many within that time period.

None of the kids tested positive for an active COVID-19 illness, but because Kawasaki is believed to be triggered by a viral infection, she says doctors suspect there may have been a past COVID infection that was never detected.

Typically, Kawasaki disease cases emerge once every two weeks at most, Kakkar added.

“Thanks to the containment and social isolation (measures), there are no other viruses circulating,” Kakkar said Wednesday.

“We definitely don't want to make the 100-per-cent link because we don't have that proof yet, but it is suspicious. And I think with the other countries coming up with their data, it does raise the fact that the most likely virus circulating right now is actually COVID.”

Similar cases have been reported in the United States and Europe. This week, New York City's health department issued an alert about 15 cases, and stressed that early recognition and specialist referral was “essential.”

Kakkar says she and her colleagues must now determine whether the patients - who range in age from one year to late teens and have all recovered - had a past COVID-19 infection, but antibody tests are not yet available in Canada.

She says efforts are underway to get a clinical test validated, or test the children as part of a research protocol.

“These kids would have had to have had their infections weeks ago, cleared the infection, and now it would be the body's immune system sort of hyper-responding to the infection,” Kakkar guesses.

“The closest we've come to identifying COVID is when we see that, for example, the child's negative but the parents are COVID-positive.”

“Pediatricians are very aware of Kawasaki disease because it actually happens with other viral illnesses and infections as well. So it's not specific to COVID-19 and they would know how to manage that.”

The questions arise while much of Quebec prepares to gradually reopen daycare and elementary schools Monday, with the Greater Montreal area set to reopen May 19.

But Kakkar suggested the emerging mystery around Kawasaki-like symptoms is not enough to derail those plans.

“Compared to the numbers of kids who've had COVID, this is a very rare complication,” says Kakkar.

Kawasaki is diagnosed through a combination of clinical signs and blood markers, with a set number of criteria that define classic symptoms.

The suspicious patients are considered “atypical Kawasaki” cases because they have some, but not all of the criteria, says Kakkar.

That includes the fact many are older, when Kawasaki typically strikes before age 6.

“That's what puzzled us on the wards the last few weeks,” she says. “It is important for all the other doctors and the parents to be aware of these bizarre symptoms.”

Like COVID-19, there is still much to learn about Kawasaki disease, she adds.

“We think it's a viral or a bacterial trigger, but we don't really know - is it something genetic? Is there an immune trigger? Is there something that's changed in the environment? We don't know.”

This report by The Canadian Press was first published May 6, 2020.