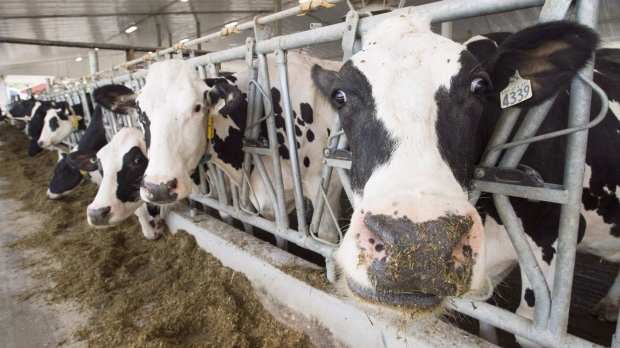 Dairy cows are seen at a farm on Aug. 31, 2018 in Sainte-Marie-Madelaine, Que. The Canadian Paediatric Society says it's not changing its stance on cows milk for babies after the American Academy of Pediatrics said it was an option in an emergency. The society's advice remains that parents wait as close to a year as possible before introducing cow's milk to a baby's diet. THE CANADIAN PRESS/Ryan Remiorz

The Canadian Paediatric Society says it's not changing its stance on cow's milk for babies after the American Academy of Pediatrics said it was an option in a feeding emergency.

Dr. Catherine Pound, former chair of the Canadian Paediatric Society's nutrition committee, says the U.S. formula shortage has created a unique situation for our southern neighbours that does not exist here.

Pound says the society's advice remains that caregivers wait as close to a year as possible before introducing cow's milk to a baby's diet.

She says that's because the proteins in cow's milk can be difficult for a baby's gut to digest and can actually cause microscopic bleeding that could lead to anemia.

The American Academy of Pediatrics says parents unable to breastfeed or find formula amid a dearth of supply there may be able to give whole cow's milk to babies who are older than six months and usually on regular formula.

In advice posted to the AAP Parenting Website, the organization says cow's milk is a better option than diluting formula or making homemade formula.

"In a pinch, you could feed them whole cow's milk for a brief period of time until the shortage is better. This is not ideal and should not become routine," it says on at HealthyChildren.org.

The AAP added that caregivers should also give iron-rich foods to babies on cow's milk and consider talking to their pediatrician about giving the baby an iron supplement until formula is available.

Pound said the CPS advises children aged one and up be restricted to 500 millilitres cow's milk a day because it can suppress appetite and interfere with a child's solid food intake.

But cow's milk should not be given to babies younger than 12 months because of concerns about microscopic gut injuries that could lead to bleeding, she added.

"The problem with that is, if you lose a tiny amount of blood every day, then you become anemic, meaning a lack of iron," said Pound.

"And we know that iron is essential to brain development. So that's why we want to introduce it as late as possible."

A U.S. recall of certain products by Abbott Nutrition has exacerbated ongoing supply chain issues among formula makers, increasing demand for other brands and emptying shelves south of the border.

The Retail Council of Canada said a similar recall in Canada in February has also begun to strain supply here and that some stores are limiting the amount of formula Canadians can order online and in person.

However, council spokeswoman Michelle Wasylyshen said Wednesday the council's members are not seeing the same degree of shortages that U.S. outlets are.

While some retailers report their stock is stable, others say formula supply has been an ongoing issue since mid-2021 due to global supply chain challenges, Wasylyshen said in an emailed statement.

"Specialized formula SKUs that do not have substitutions are impacted to the greatest extent and we encourage shoppers to not 'panic buy' in order to ensure that there is enough for those who need it."