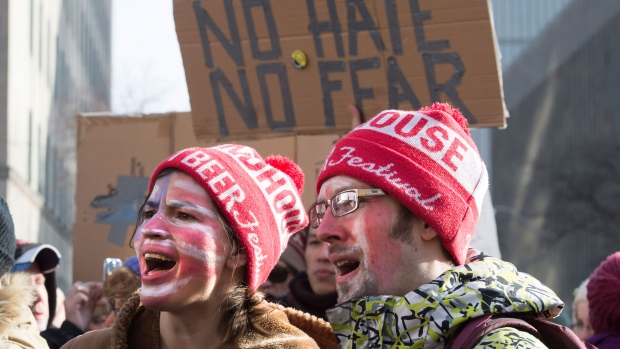 Demonstrators chant outside the U.S. Consulate during a protest against US President Donald Trump's executive order banning citizens of seven majority-Muslim countries from entering the United States in Toronto on Monday Jan. 30, 2017. THE CANADIAN PRESS/Frank Gunn

TORONTO - Hundreds of people gathered outside a shut-down U.S. consulate in Toronto and elsewhere in Canada on Monday to denounce the American entry ban on people from seven predominantly Muslim countries, and to urge action from the Liberal government.

The peaceful protesters, who also expressed sympathy for the victims of Sunday's mosque massacre in Quebec City, blocked traffic, held placards, chanted, and marched a short distance to city hall and back to the consulate as Toronto police kept an eye on them.

On the periphery of the protest, American citizen Anne Rubenstein said she felt “deeply ashamed” of her country.

“I can barely find the words for how angry and pained I am that (President) Donald Trump with one executive order has spit on the things that were the very foundations of American democracy,” said Rubenstein, who is currently teaching history at York University.

Word of the protest, organized via social media by groups such as No One is Illegal, prompted the U.S. consulate to announce on Sunday that it was essentially closing operations for the day.

On Friday, Trump signed a 90-day executive order to stop citizens of seven Muslim countries - Iran, Iraq, Sudan, Somalia, Syria, Yemen and Libya - from entering the U.S. and to bar asylum seekers. The move created chaos at airports across the U.S. over the weekend as confusion abounded over who was affected by the ban and to what extent.

The ban prompted outrage around the globe.

In Ottawa, hundreds of people formed a human chain and surrounded the U.S. embassy in Ottawa chanting “No hate, no fear, refugees are welcome here.” Demonstrators drew links between the Trump administration's actions and Sunday's attack at the Quebec mosque.

Sarah Follett, who was carrying her small daughter on her shoulders at the Toronto protest, said she felt an “intense” need to do something and to speak out.

“There's something really horrible going on,” Follett said at the Toronto protest. “It's important that, all around the world in different places, we're standing up and showing that this is not acceptable, this is not what people want.”

Sharmeen Khan, with No One is Illegal Toronto, said people had a “huge appetite” to respond to the ban as well as to what she said was rising xenophobia and Islamophobia. Monday's rally, she said, was just a prelude to a bigger national day of action slated for Saturday.

An immediate demand of the Liberal government of Justin Trudeau, Khan said, was for Canada to scrap the safe third country agreement which bars would-be refugees from seeking asylum in Canada if they've transited the United States and issue temporary resident permits to anyone turned away by the U.S.

Trudeau's senior aides and government officials worked the phones all weekend, looking for word from their American counterparts that the ban did not apply to Canadians with ties to the countries covered by Trump's order.

Immigration Minister Ahmed Hussen said the White House did provide assurances that Canadians with dual citizenship and permanent residents with a valid residency card and a passport from their home country would not be turned back at the American border.

Adrian Schubert, who said he was Jewish, said similar bans have occurred in the past and not ended well.

“As a citizen of a democracy, I find it appalling,” Schubert said at the Toronto consulate.

People hold signs as they block a street near the U.S. Consulate during a protest against US President Donald Trump's executive order banning citizens of seven majority-Muslim countries from entering the United States in Toronto on Monday Jan. 30, 2017. THE CANADIAN PRESS/Frank Gunn

Hundreds of demonstrators block traffic outside the U.S. Consulate during a protest against US President Donald Trump's executive order banning citizens of seven majority-Muslim countries from entering the United States in Toronto on Monday Jan. 30, 2017. THE CANADIAN PRESS/Frank Gunn