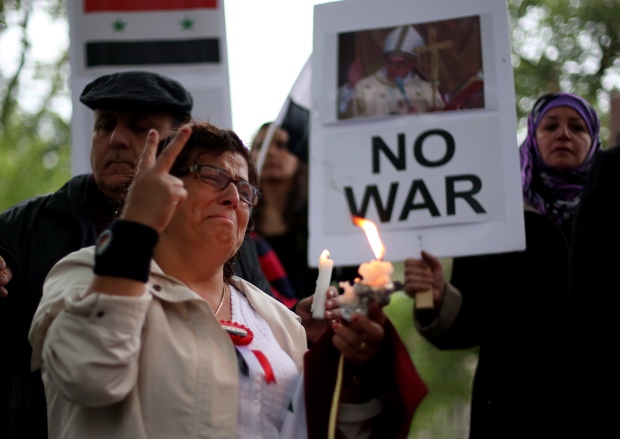 A woman is overcome with emotion as she demonstrates at a candlelight vigil with members of the Canadian Syrain community protesting the possible invasion on Syria, in Ottawa, Saturday September 7, 2013. (Fred Chartrand /The Canadian Press)

TORONTO -- Demonstrators rallied across the street from the U.S. consulate in Toronto to protest intensifying American efforts to win backing for a military strike against Syria.

"We are not going to support the United States government as it launches yet another incredibly brutal, immoral and illegal war based on lies," said Lacombe, a co-ordinator with the Canadian Peace Alliance.

The protests come as U.S. President Barack Obama presses ahead with efforts to win congressional support for military strikes in the wake of a deadly chemical weapons attack his administration blames on the Syrian government.

The U.S. says Assad's forces fired rockets loaded with the nerve agent sarin on rebel-held areas near Damascus before dawn on Aug. 21, killing at least 1,429 people, including 426 children.

The Britain-based Syrian Observatory for Human Rights, which collects information from a network of anti-regime activists, puts the toll at 502 dead.

Prime Minister Stephen Harper has said Canada has "no plans" for a military mission against Syria, though Canada is among the countries that have said they endorsed a military strike against the Assad regime.

Rehab Saad, who came to Canada from Syria 17 years ago, said the Obama administration should back off its calls for military intervention.

"Barack Obama: You got the Nobel Peace Prize not to start war... Don't start a war that nobody will know when and where it's going to end," she said.

In Regina, several dozen people at a rally in the downtown took issue with talk of military action before a UN report on the chemical attack is released.

Others expressed concern, not just with a possible U.S. intervention, but that a number of countries are supplying arms to both sides of the Syrian conflict.

Noor Mitri, who is from Syria and has been in Canada 13 years, said it's a confusing situation for the people of Syria, let alone the people in Saskatchewan.

"There is constant manipulation to say that war will bring any resolution," said Mitri. "That, in itself, is false."

Nancy Bale said she helped organize the rally after seeing what she considered to be yet another war beginning in the media.

Obama has said action against Syria would not be an open-ended intervention and would not involve "boots on the ground."

The Obama administration came under pressure Saturday from European officials to delay possible action until UN inspectors report their findings about the alleged chemical weapons use.

But European Union foreign ministers meeting in Lithuania with U.S. Secretary of State John Kerry did endorse a "clear and strong response" to an attack they said strongly points to Assad's government.

Obama will make an address from the White House on Tuesday to make his case for military action.

-- With files from Associated Press