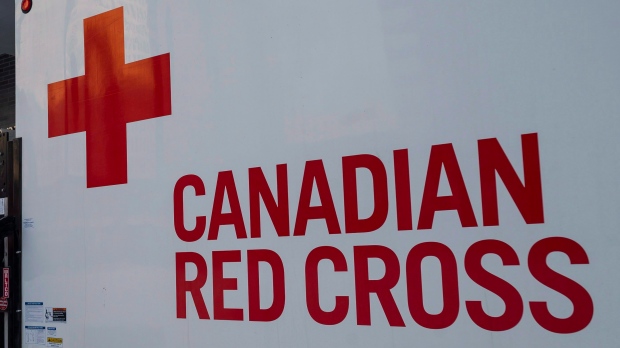 FILE - A Canadian Red Cross unit at is seen in Toronto on Friday, January 5, 2018. THE CANADIAN PRESS/Christopher Katsarov

A prominent children's hospital in Ottawa will soon be receiving help from the Canadian Red Cross as it grapples with a massive wave of pediatric respiratory illnesses that have stretched resources to the breaking point, the organization announced Sunday.

The Children's Hospital of Eastern Ontario, more commonly known as CHEO, requested the additional support amid a surge of admissions from children and youth.

Musselman did not indicate a firm start date for the agreement, but CHEO Chief Nursing Executive Tammy DiGiovanni said a small contingent of Red Cross personnel would arrive as of next week to support clinical teams.

"This will allow some of our redeployed staff to go back to their regular roles and ensure Team CHEO can provide the safe, world-class care that our patients deserve," DiGiovanni said in a statement, noting the hospital has received help from other local health-care providers and community care organizations during a time she said required "all hands on deck."

CHEO opened a second intensive care unit in November to treat what it called an unprecedented number of critically ill babies and children.

Government data showed that only 10 of the 130 beds in Ontario's pediatric intensive care units were free as of Dec. 1. At times last month, the number of pediatric patients exceeded the number of ICU beds available system-wide.

"We have redeployed staff and medical staff from surgical and medical care units, added extra beds and workers in our pediatric intensive care and emergency departments as well as inpatient units, and asked non-clinical staff to support clinical teams where possible," she said. "Everyone at CHEO has been going all out to take care of kids and their families."

7/8 Thanks to this support from @redcrosscanada , some of our redeployed staff will be able to go back to their regular roles so Team #CHEO can continue to provide the safe, world-class care that our patients deserve.

The situation prompted some health-care professionals and parents to voice their anger and frustration on social media over the weekend.

One of them was Ottawa family doctor Nili Kaplan-Myrth, who called it a "crisis."

Kaplan-Myrth said the contrast between overwhelmed hospitals flooded with sick children and the rest of society going about its business has been distressing to watch. But more upsetting still, she said, is her belief that much of the current strain could have been averted.

As early as the summer, Kaplan-Myrth said she and other healthcare professionals were issuing calls for the province and its public health units to be “proactive” ahead of the fall by reintroducing public health protocols like masking while pushing for more vaccination against COVID-19 and other illnesses. Without such measures, they warned, hospitals could be overwhelmed come fall and winter.

But she said though earlier action could have helped prevent the current crisis, implementing mandatory masking in key public venues and increasing investments in the health-care system would be "better late than never."

“It’s not too late to do the right thing,” said Kaplan-Myrth.

Infectious disease experts have been urging parents to get children five and under in Ontario vaccinated against COVID-19 and influenza ahead of the holiday season.

According to Public Health Ontario, as of Nov. 6 only seven per cent of children in the province aged six months to five years had received a first dose of a COVID-19 vaccine. But experts say it's those youngest kids who are at higher risk of hospitalization from COVID-19 compared to other children and teens.

Several children's hospitals in Ontario have been cutting back on surgeries to ease pressure on pediatric intensive care units and emergency rooms.

The issue is not unique to Ontario, with hospitals across the country struggling to keep pace with the triple wave of viral respiratory illnesses.

Alberta Health Services said it's discharging all children from the Rotary Flames House in Calgary that helps dying children and their families. It's also pausing admissions due to a virus-driven influx of patients.

Children's hospitals in Calgary and Edmonton have been at or above full capacity since last week.

Meanwhile, in Newfoundland, some routine surgeries and appointments at the Janeway Children's Health and Rehabilitation Centre in the capital city of St. John's are being cancelled next week due to the surge in illnesses and admissions.

This report by The Canadian Press was first published Dec. 4, 2022.