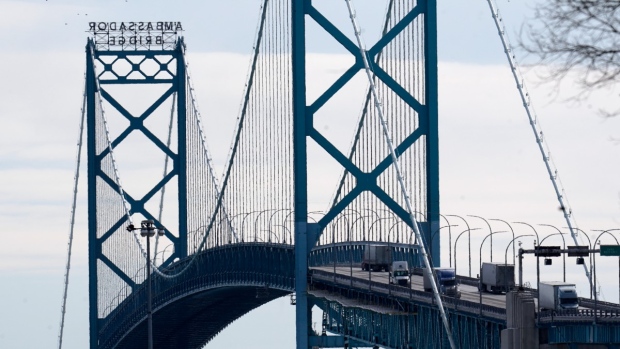 Traffic flows over the Ambassador Bridge in Detroit, Feb. 14, 2022 after protesters blocked the major border crossing for nearly a week in Windsor, Ont. (AP Photo/Paul Sancya)

The Canadian side of the Ambassador Bridge has reopened after a suspicious package prompted police to close it for a few hours.

Windsor police tweeted just before 9 p.m. that the bridge on the Canadian side “will be shut down for an undetermined amount of time.”

In a subsequent tweet, police confirmed that the closure was connected to an investigation into a suspicious package found in a vehicle.

Police advised motorists to use the Detroit-Windsor Tunnel as an alternate route while they investigated.

Just before 11 p.m., police tweeted that the bridge had been cleared and would reopen to traffic soon.

They did not provide further details on the contents of the package and the result of their investigation.