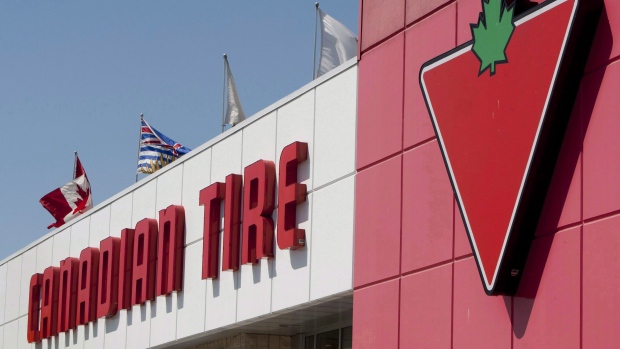 A Canadian Tire store is seen in North Vancouver on May 10, 2012. Canadian Tire Corp. is diversifying with the purchase of 65 Party City stores across Canada for $174.4 million cash. The Toronto-based company says it plans to add stand-alone stores and also make Party City's products available across 500 Canadian tire retail stores and online at Canadiantire.ca. THE CANADIAN PRESS/Jonathan Hayward

TORONTO -- Canadian Tire Corp. is diversifying its store offerings with the purchase of 65 Party City stores across Canada for $174.4 million cash, a move the national retailer expects to strengthen its connection with millennial customers.

It plans to add stand-alone Party City stores as well as sell its products available across 500 Canadian tire retail stores and online at Canadiantire.ca.

Canadian Tire estimates that it will be able to double Party City's annual sales in Canada to $280 million by 2021.

"Strengthening our marketplace is at the heart of our growth strategy and we are excited to welcome Party City into the Canadian Tire family of companies," CTC executive vice-president Allan MacDonald said in a statement.

"We believe the Party City-Canadian Tire partnership will drive more trips, improve our offers in micro seasons, strengthen our connection with millennials and Canadian families and expand the appeal of Triangle Rewards."

Party City Holdco Inc. says it will use proceeds from the sale to pay down debt. It will also have a long-term wholesale supply agreement with Canadian Tire through Amscan Inc., beginning with an initial term of 10 years.

The New York-based company has been struggling in an increasingly competitive retail environment, including strong competition from online retailers. It announced in its second-quarter results Thursday that it would shutter additional stores in the U.S. Its stock has fallen some 60 per cent in the past 12 months.

Meanwhile, Canadian Tire has so far managed to weather the gathering retail storm, partly due to its diversification push.

The Canadian Tire deal was announced as the Toronto-based home and outdoor goods retailer announced second-quarter results, which included a 14 per cent increase in net income attributable to shareholders.

The $177.4-million profit was up from $156 million a year earlier, while earnings per diluted share increased 20.5 per cent to $2.87 from $2.38 in last year's second quarter when more shares were outstanding.

Revenue increased 5.9 per cent from last year to $3.67 billion from $3.48 billion, mostly from retailing.

Analysts had estimated $3.72 billion of revenue and $187.3 million or $3.01 per share of adjusted earnings, according to financial markets data firm Refinitiv.