Canadian trash from Philippines set to arrive in Vancouver Saturday 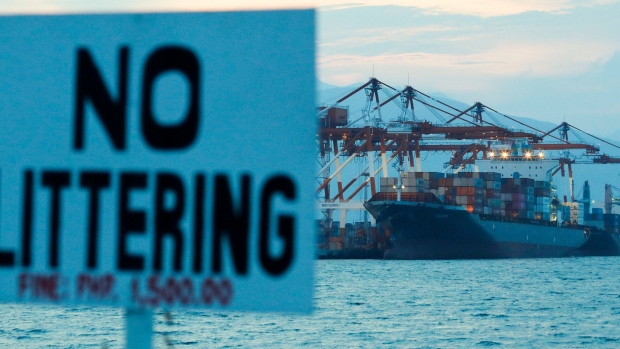 OTTAWA - Containers of Canadian trash that festered in the Philippines for years are set to arrive home just in time to celebrate the country's 152nd birthday.

The Anna Maersk is scheduled to dock at the Port of Vancouver, with the containers aboard, on Saturday, June 29.

The arrival will bring nearly to a close the nearly six-year long garbage saga that led to a diplomatic dispute with the Philippines and drew attention to the growing global problem of plastic waste.

It is also resurrecting calls for Canada to ban exports of waste altogether, an issue that is likely to come up in the fall election.

B.C. NDP MP Gord Johns has been calling for a ban on plastic waste exports for years. Conservative Leader Andrew Scheer's new environment platform says a Conservative government would ban all plastic-waste exports unless the importing nation can prove the plastic will actually be recycled.

Kathleen Ruff, founder of the human-rights advocacy site rightoncanada.ca, said Canada needs to show leadership and agree to an amendment of the international law that governs how waste can be exported.

The Basel Convention, which came into force in 1992, requires informed consent before a developed nation can export hazardous waste to a developing country. The proposed amendment would bar the export of hazardous waste entirely, with or without consent.

Canada has resisted the amendment and was silent on the matter during recent meetings about the convention in Switzerland. An official with Environment Canada said Canada originally supported a proposal to ban exports of waste meant for final disposal - such as in landfills or incinerators - but won't support a prohibition on the export of recyclables because there are both environmental and economic benefits to having global recycling operations.

The Basel ban meetings came in April, just as the refuse dispute with the Philippines was heating up. The Canadian garbage arrived there in 2013 and 2014 falsely labelled as plastics for recycling, but inspections revealed two-thirds of the contents were regular trash, including dirty diapers, kitchen waste and electronic garbage.

Canada had no legal means six years ago to compel the Canadian company that exported the waste to bring it back to Canada, and tried to negotiate with the Philippines to dispose of it locally. Some of it was dealt with that way, in 2015, but Philippine environment groups objected and the disposal was abandoned.

In 2016 a Philippine court ordered the garbage returned to Canada and the two countries established a working group in 2018 to try to reach a conclusion.

But in April, President Rodrigo Duterte grew tired of waiting and threatened to send the containers back to Canada himself if the Canadian government didn't act by May 15.

“Prepare a grand reception,” he said then. “Eat it if you want to.”

His threats, which garnered international attention, lit a fire under the Canadian government, which shortly after agreed not only to bring the garbage back but to pay for the transportation.

Canada nevertheless missed the May 15 deadline, prompting Duterte to recall the Philippines' ambassador and consuls general from Canada.

The garbage eventually left the Philippines on June 1 and was transferred to the Anna Maersk in Taiwan on June 8 before beginning its voyage back across the Pacific Ocean.

Canada is spending $1.14 million for the shipping costs and another $375,000 for the garbage to be burned in a Vancouver-area incinerator.

The Philippines is now considering an outright ban on the import of foreign plastics, one of a number of Asian nations that have grown weary of being the dumping ground for the world's waste.

The global plastics issue has been heightened since China, once the world's largest importer of plastic waste intended for recycling, closed its doors to the material in January 2018, citing too much contamination of the materials.

Thousands of tonnes of waste, mostly from Europe and North America, needed to seek out new markets and were redirected to Vietnam, Thailand and Malaysia. Unscrupulous companies popped up promising proper disposal or recycling but actually ended up burning or just dumping the waste when it arrived, adding to both air and land pollution in countries that struggle to manage their own waste.

Since the Philippine garbage situation gained international attention, both Malaysia and Indonesia have indicated they wanted to return garbage to Canada that showed up their shores.

Indonesia's Waste and Hazardous Waste Management Directorate General Secretary Sayid Muhadhar said earlier this month five containers sent to the port of Surabaya were labelled as paper for recycling but were heavily contaminated with garbage including diapers and old shoes. Those containers are being returned to Seattle, where the shipment originated, but the company that shipped them is Canadian.