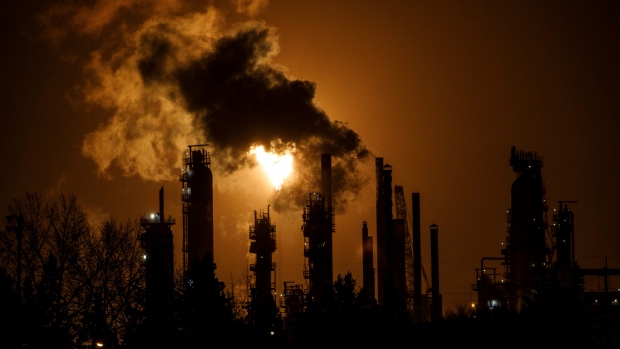 A flare stack lights the sky from an oil refinery in Edmonton on December 28, 2018. THE CANADIAN PRESS/Jason Franson

OTTAWA - Canadians are - and will remain - among the biggest consumers of energy over the next decade even as policies ramp up to make the country more energy-efficient, a global energy forecast suggests.

The International Energy Agency's World Energy Outlook published Wednesday shows Canadians used more than 300 gigajoules of energy per person last year, three times the world average and among the highest in the world.

Canada's energy use was slightly higher than what Americans consumed, and almost twice the energy demand recorded in the European Union.

The agency report forecasts that as a result of policies to make homes more efficient, remove fossil fuels from the power grid and put more electric cars on the road, Canada's power demand will fall below 300 gigajoules per person by 2030.

But it will still be among the highest energy use in the world, and even though energy demand is expected to rise in India, China and the Middle East, Canada's consumption is forecast to remain almost three times the world average.

It takes about 25 gigajoules to power the average Canadian house over 12 months, but the total energy use per person references all energy used, including in transportation, industry, and heating and cooling.

The IEA report doesn't breakdown Canada's energy use by source. However, a report earlier this year from BP said that, in 2020, 61 per cent of energy used in Canada was supplied by burning oil and gas, 25 per cent was from hydroelectricity, six per cent was nuclear energy, four per cent came from renewables like wind and solar power, and 3.7 per cent from burning coal.

BP said oil and gas provided 56 per cent of the world's total energy consumption, while coal provided 27 per cent, nuclear four per cent, hydroelectricity seven per cent and renewables 5.6 per cent.

Isabelle Turcotte, director of federal policy at the Pembina Institute, said many people blame Canada's high energy consumption on its size and climate, and an economy that has been reliant on energy-intensive natural resource production.

“But it doesn't have to be this way,” she said. “This doesn't need to translate into high energy needs. We can see other countries that have similar climates being more energy-efficient.”

Keith Stewart, a senior energy strategist at Greenpeace Canada, said this year's IEA energy forecast is aligning its projections for energy demand and supply for the first time with the Paris agreement goal to keep global warming to as close to 1.5 C as possible by the end of this century.

Science suggests the world is already an average of 1 C warmer than it was in pre-industrial times, as decades of fossil-fuel burning left millions of tonnes of heat-trapping gases like carbon dioxide and methane sitting in the atmosphere.

The world is witnessing more frequent extreme weather - heat waves and droughts, massive hurricanes and flooding - at current temperatures, and Stewart said every one-tenth of a degree will add more climate hurt.

Global scientists concur that above 2 C, climate change will become catastrophic and irreversible.

It is only that last scenario, which would mean no new greenhouse gas emissions are left in the atmosphere, where warming can be limited to 1.5 C, the IEA said.

Canada passed a law last spring requiring it to get to net zero emissions by 2050, but the policies to do so have not yet been unveiled.