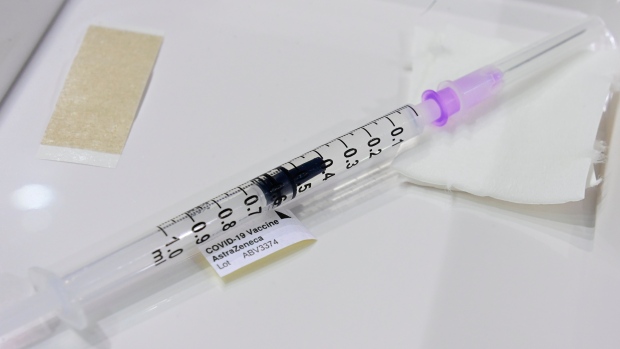 A syringe with the AstraZeneca vaccine against Covid-19 is picutred at a new vaccination centre at the former Tempelhof airport in Berlin, Germany, on Monday, March 8, 2021 (Tobias Schwarz / Pool via AP)

OTTAWA -- Canadians are much more wary about being injected with the Oxford-AstraZeneca vaccine than they are about receiving other vaccines approved for use in Canada, a new poll suggests.

Just 53 per cent of respondents to the poll, conducted by Leger and the Association for Canadian Studies, said they would trust the AstraZeneca vaccine being given to themselves or family members to immunize them against the coronavirus that causes COVID-19.

AstraZeneca also fared worse compared to the Johnson & Johnson vaccine, which has been approved but is not yet available in Canada. Sixty-nine per cent expressed trust in the J and J option.

The online poll of 1,523 adult Canadians was conducted March 26-28, just before the latest controversy erupted involving the trouble-plagued AstraZeneca vaccine. It cannot be assigned a margin of error because internet-based polls are not considered random samples.

On Monday, the National Advisory Committee on Immunization recommended that AstraZeneca not be used on people under the age of 55. That was in response to reports that some three dozen patients in Europe, primarily younger women, developed blood clots after receiving the vaccine.

That marked the third time NACI has changed its guidance about the use of AstraZeneca.

In late February, the advisory committee said it shouldn't be used on people over the age of 65, citing an insufficient number of seniors involved in clinical trials. Two weeks later, NACI retracted that advice, based on real-world evidence of AstraZeneca's effectiveness in seniors.

The poll suggests wariness about AstraZeneca hasn't so far made Canadians more hesitant about getting vaccinated against COVID-19.

Seventy-eight per cent of respondents said they intend to get vaccinated, continuing a slow but steady upward trend since last October, when 63 per cent planned to get immunized.

This report by The Canadian Press was first published March 30, 2021