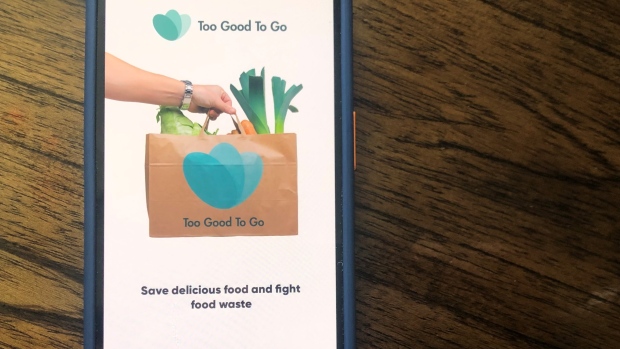 Too Good To Go app is seen in this undated photo.

TORONTO - When Gillian Pulfer picked up roasted sweet potato soup, flank steak and chicken salad from a Toronto Pusateri's Fine Foods for $10 last weekend, the deal was too good not to brag about.

“It's a more high-end, luxury grocery store...so most people don't necessarily have the budget to go shop there, but you're saving money and you're getting good food,” said Pulfer.

After chowing down, she let her Instagram followers in on her secret: She found the haul on Too Good to Go. The app is one of many uniting deal-seekers with restaurants and grocers eager to keep aging food that's still fit for consumption out of the trash in exchange for a small fee.

Users of apps like Too Good To Go, Flashfood, Feedback and Olio say they have paid anywhere from $3 to $10 for prepared lunches or dinners, a week's worth of vegetables and fruit, several loaves of bread, pastry boxes and even, entire pizzas or cakes.

“Over the holidays, we had a father who wrote in and thanked us because he'd been let go from his job due to COVID-19 and he used the money saved on Flashfood to buy stocking stuffers for his kids,” said Tribe.

The app, which is used by supermarket conglomerate Loblaw Corp., was started by Toronto entrepreneur Josh Domingues in 2016, after his chef sister threw out $4,000 of food following a catered event.

The app offers produce, meat, fish, bread, dairy and pantry staples nearing their best before date and often marked down by at least 50 per cent. Some items last for weeks, if frozen or cooked. Others have a day or two left.

Orders are retrieved in supermarkets, which typically mark items nearing their best before dates down or donate them to charities, food banks and farms for animal feed.

But those methods still leave grocers responsible for a quarter of the country's food waste, so Flashfood targeted that portion exclusively, said Tribe. (The app does not divert food from charities, he added.)

To date, Flashfood has kept more than 13.5 million kilograms of food out of landfills and saved users a collective $90 million.

“Some people claim this food waste can be solved by downloading an app,” said Maria Corradini, the Arrell Chair in Food Quality at the University of Guelph.

“That's probably not true, but of course they can have a contribution to reducing this burden.”

She believes better inventory planning and use of artificial intelligence would go even further to addressing food waste.

Too Good To Go's country manager for Canada agrees inventory management is key, but said, “matching supply and demand is very complex” and no restaurant wants to produce less only to find it can't serve late customers.

Too Good To Go mostly deals with restaurants, bakeries, and butchers, but also partners with grocery and convenience stores.

Users of the app, which was founded in Copenhagen in 2016 and expanded to Canada last July, order ahead before fetching items at designated times.

What they pick up is a mystery because businesses sell “surprise bags,” and while some offer hints about their contents, others don't.

Signing up for Too Good To Go was a no-brainer, said chief operating officer James Canedo.

“As chefs, you never want to see food wasted. It's almost sacred for us,” he said.

“So many people out there don't have the same privileges, so for food to be wasted, that is something we're trying to prevent.”

Corradini lauds those sentiments and said the apps' waste reduction goals are noble, but there are risks.

While some apps only deal with reputable vendors staffed with employees trained in handling food, others like Olio allow anyone to prepare food at home or sell items they can't finish.

“I would never go for something that has been opened because you never know what went on there,” Corradini said.

She added that even food from grocers and restaurants should be examined closely before eating and customers should cook, freeze, prepare or consume anything they buy that is due to go off soon very quickly.

This report by The Canadian Press was first published Jan. 23, 2022.