Canadians in the dark about how their data is collected and used, report finds 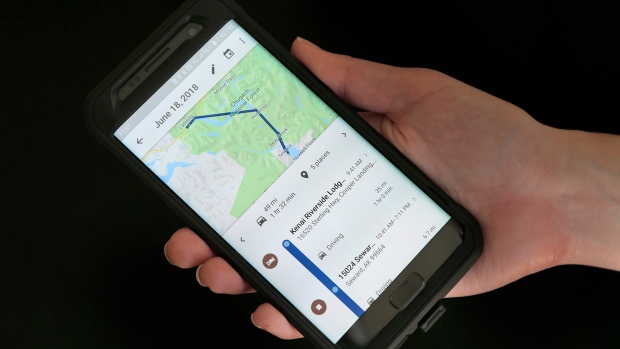 In this Aug. 8, 2018, file photo, a mobile phone displays a user's travels using Google Maps in New York. Google attracted concern about its continuous surveillance of users after The Associated Press reported that it was tracking people‚Äôs movements whether they like it or not. (AP Photo/Seth Wenig, File)

OTTAWA - A new report says digital technology has become so widespread at such a rapid pace that Canadians have little idea what information is being collected about them or how it is used.

The report by David Lyon, former director of the Surveillance Studies Centre at Queen's University in Kingston, Ont., highlights a need for more transparency in data collection and analysis, as well as new digital rights and means of ensuring justice for Canadians.

Based on research from 2016-21, “Beyond Big Data Surveillance: Freedom and Fairness” says regulations have not evolved quickly enough to keep up with ever-changing technologies.

In addition, the report argues that some, such as women, Black people and Indigenous groups, are more exposed to surveillance than others.

The research team looked at the use of “big data” in security and policing, marketing and political persuasion, and governance through innovations such as “smart cities.”

The Surveillance Centre is hosting a conference this week at the University of Ottawa to coincide with release of the findings.

“To imagine that surveillance problems reside mainly in cameras on the street or in the building you enter is to live in the past. You carry the primary surveillance technology in your pocket - your phone,” said Lyon, professor emeritus at Queen's.

The report comes as the federal government studies potential changes to privacy laws governing agencies in the public and private spheres amid the growing influence of social media platforms and tools such as facial recognition software.

A persistent problem identified by the research was lopsided information - the notion that citizens and consumers have little idea what data is collected about them, let alone the consequences of being visible. Meanwhile, the report notes, corporations and governments amass huge amounts of data on Canadians, often using it in unspecified ways.

The report also cites the dilemma of today's “tangled surveillance” that is more complex than in the past.

Artificial intelligence has led to calls for more transparency about how algorithms work, along with broader ethical guidelines, the report says. “But few, even among computer scientists, have worked out what such transparency might entail.”

Meanwhile, various agencies, including police departments, press for the use of more data analytics, while the COVID-19 pandemic has opened new avenues of data surveillance.

“Changes in technology and practice appear far faster than any regulations to rein them in,” the report says.

“Few can keep up with the speed and magnitude of changes in data analysis and use, which means less protection, especially for the most vulnerable.”

Among the report's recommendations:

- Move beyond traditional privacy protection to ensuring data rights and justice as personal information is increasingly used at a mass level;

- increase collaboration between researchers in social and computing sciences, regulators and civil society; and

- expand public awareness of how Canadians are being affected every day by data monitoring.

“Our post-pandemic world demands thoughtful and decisive action to assess and confront the emerging world of surveillance, which is everywhere and often discriminatory,” the report says.

“The issues deserve to be front-and-centre of educating everyone for everything from safe smartphone use to responsible computing systems. We need innovative modes of assessing and regulating digital developments. A freer and fairer society is a more humanly habitable world.”

Elizabeth Denham, who served as information and privacy commissioner in British Columbia and information commissioner in the United Kingdom, told the conference Wednesday that greater accountability and transparency are needed from large online platforms.

She suggested that such laws will emerge when competition, content and data regulators “come together in a much more integrated way.”