Canadians killed in Afghanistan honoured at re-dedication ceremony of cenotaph 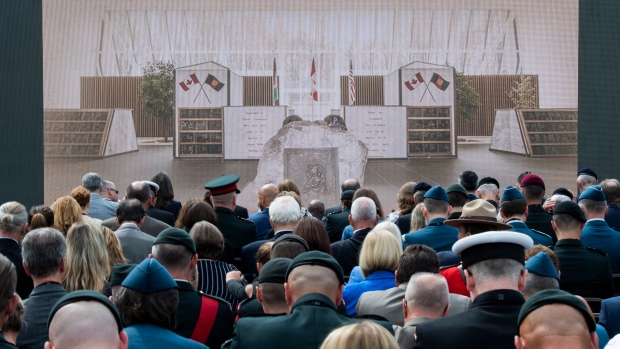 An image of the Kandahar Cenotaph, located inside the Afghanistan Memorial Hall, is shown on a screen during the cenotaph's rededication ceremony at National Defence Headquarters in Ottawa on Saturday, Aug. 17, 2019. THE CANADIAN PRESS/Justin Tang

OTTAWA - Emotions ran free in Ottawa Saturday as the more than 150 Canadians killed in Afghanistan were honoured during a sombre ceremony attended by hundreds of family members, many of whom continue to struggle with the loss of their loved ones.

The ceremony involved the re-dedication of a cenotaph built during the war in honour of the fallen. It stood for years at the Kandahar Airfield, where the Canadian Forces was headquartered for most of its time in Afghanistan, before being moved back to Canada when the mission ended in 2014.

Under overcast skies, the families and former comrades of the fallen listened as Gov.-Gen. Julie Payette, Defence Minister Harjit Sajjan, defence chief Gen. Jonathan Vance and others spoke of the enduring legacy left behind by those who fought and died during Canada's 13-year war in Afghanistan.

One-hundred-fifty-eight Canadian soldiers died during the mission, which started shortly after the terrorist attacks on Washington and New York City on Sept. 11, 2001. Canadian diplomat Glyn Berry, journalist Michelle Lang and two civilian contractors were also killed during the war.

Yet much of the ceremony focused on the families of those who died, whose lives were irreversibly changed during the mission even as much of the rest of the country moved on, turning the page on the war in Afghanistan when the last Canadian troops returned home five years ago.

Families like that of Pvt. David Robert James Byers, whose daughter was born a few months after he and three other Canadian soldiers were killed by a suicide bomber in September 2006. Byers' mother Catherine Jane Byers and his daughter were among the 600 family members to attend Saturday's ceremony.

“We're the ones that live with this every day,” Catherine Jane Byers said as she stood outside the specially built memorial hall where the cenotaph, comprised of plaques bearing the names and pictures of the fallen, is housed. “We're the ones that celebrate birthdays. See our grandchildren grow up without a father. That is our reality.”

The re-dedication ceremony at the Department of National Defence's new headquarters building in west Ottawa was actually a redo for the military, which came under fire after holding a private event in May. Some families were angry they were not invited, prompting an apology from Vance and plans for Saturday's event.

Afterward, Catherine Jane Byers and several other relatives of those killed in Afghanistan told reporters they were grateful for the second ceremony, during which Payette, Sajjan and the rest underscored this country's gratefulness to those who paid the ultimate price - and the loved ones they left behind.

“All of you who lost someone â€¦ you know what has been lost,” Payette said. “A wound that this memorial can acknowledge even if it cannot fully heal. But it must be acknowledged, and that is why we are here today, to focus our attention on these brave men and women and the people who loved them.”

Faces of the fallen are shown on a screen during the rededication ceremony of the Kandahar cenotaph at National Defence Headquarters in Ottawa on Saturday, Aug. 17, 2019. THE CANADIAN PRESS/Justin Tang

The memorial to the Canadian killed on the Afghan mission is seen at Kandahar Airfield, Afghanistan, on April 28, 2011. THE CANADIAN PRESS/ Colin Perkel