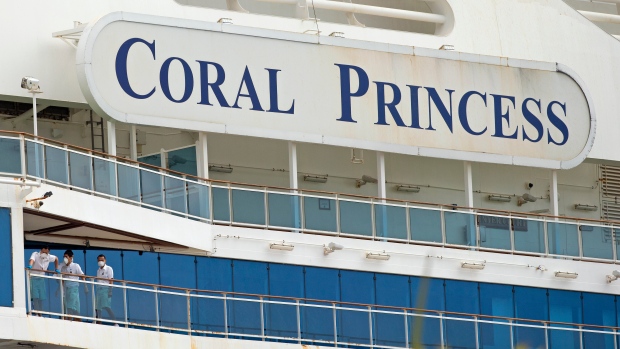 Coral Princess cruise crew members looks from their balcony at PortMiami as the coronavirus pandemic continues on Sunday, April 5, 2020 in Miami. (David Santiago/Miami Herald via AP)

Canadians remained aboard the COVID-19-stricken Coral Princess cruise ship on Sunday, a full day after some passengers were allowed on dry land.

New guidelines from the U.S. Centers for Disease Control saying cruise passengers shouldn't board commercial planes have limited who is allowed off the ship, Princess Cruises said in a statement, adding that only those with imminent chartered flights can disembark.

“This will unfortunately result in further delays in disembarkation and onward travel for many guests as we work through this complex, challenging and unfortunate situation,” the statement said.

Only those bound for Australia, the U.K. and California have been allowed to leave the ship.

North Vancouver resident Sanford Osler said he and his wife are more than ready to head home, and they hope the federal government will help speed up the process.

“Princess says they will try to a arrange a chartered flight for us, but we are calling on Canada to send a plane down for us,” Osler said in an email.

The couple is among 97 Canadian passengers aboard the ship, which left Santiago, Chile, on March 5 and docked in Fort Lauderdale, Fla., on Friday.

Osler said the last time he was on dry land was March 13, and passengers have been confined to their rooms for nearly a week.

“We're still healthy but do want to get off this ship and get home,” said Osler, 70.

Two people aboard the ship have died, and 12 have tested positive for COVID-19, Princess Cruises has said. Still more are experiencing flu-like symptoms.

Global Affairs said Sunday that apart from the Coral Princess, it knows of 49 Canadian passengers and eight Canadian crew members on seven ships.

It said it isn't aware of any of those people testing positive for the novel coronavirus.

Cruise ships have been a hotbed for the novel coronavirus beginning in February, when the largest outbreak outside mainland China was aboard the Diamond Princess ship, also operated by Princess Cruises.

The Diamond Princess was quarantined for two weeks in Yokohama, Japan, because of the virus. Ultimately, about 700 of the 3,700 people aboard became infected in what experts pronounced a public-health failure. They cite the close quarters and frequent socialization as contributing to the spread.

The federal government eventually evacuated 129 Canadians from the ill-fated ship and brought them to eastern Ontario for quarantine on Feb. 21, but 47 Canadians infected by the virus had to stay behind in Japan for treatment.

More recently, Canadians on the MS Zaandam and MS Rotterdam, arrived in Canada on a plane chartered by operator Holland America.

This report by The Canadian Press was first published April 5, 2020.