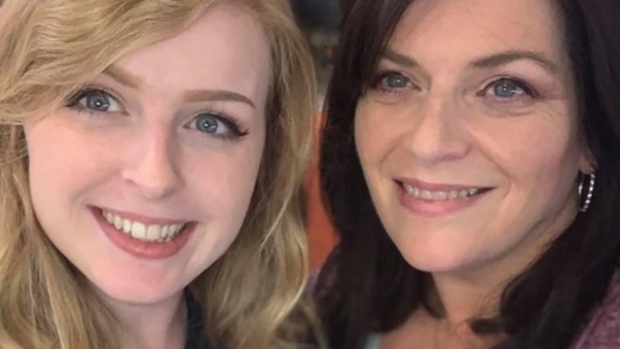 Alex Ryan (left) and her mother Joanne Pullin are shown in a handout photo. Canadians are considering modest plans for Mother's Day as COVID-19 vaccinations seem to open opportunities to celebrate, but experts warn that the threat of the third wave will make it unsafe for many people to give mom a hug this holiday. THE CANADIAN PRESS/HO

Justin Kozuch is among many Canadians making modest plans for Mother's Day amid warnings it's still unsafe to gather this weekend, even as COVID-19 vaccinations seem to open opportunities to celebrate.

Even though they've both received their first dose of the COVID-19 vaccine, the Toronto resident says he's girding himself for another missed holiday.

Kozuch says he hasn't seen his mother in-person since Christmas 2019, and expects there will be many more missed occasions before they reunite.

The 42-year-old says he considered making the two-hour trip to his mother's home in the northern stretches of Durham Region, even if just to stand on her driveway and see her smile from the balcony.

But Kozuch says he won't risk bringing COVID-19 to the small town, or worse, infecting his mother.

“There's a lot of pieces of our lives that we've kind of missed out on,” says Kozuch. “But all it takes is one thing to happen - one slight aberration - and it can all go wrong.”

Indeed, many grandmothers and mothers will spend their special day separated from offspring for a second time Sunday, as breakfast-in-bed and family functions are replaced by prepackaged brunch boxes and window visits.

The director of public health emergencies in the hot zone of Peel Region, west of Toronto, says she appreciates the heartache many families must feel after more than a year apart.

“The best gift we can give our moms at the moment is: If you haven't been vaccinated, to vaccinate, but also put in the public health guidelines and implement them,” says Peer.

Peer said public health officials are concerned that the Mother's Day fallout could be even worse this year as more contagious variants of the COVID-19 virus have fuelled a surge that's flooding hospitals across the country.

While vaccines offer hope for holidays to come, it's important that people don't mistake the first of a two-dose series as sufficient to celebrate as usual this weekend, says Peer.

“At this stage, one dose is not enough to protect your mom,” she says, recommending Canadians stick to virtual and long-distance hugs until case numbers drop and more people are fully immunized.

For Marco Almeida in Winnipeg, however, vaccinations have offered a chance to make up for a Mother's Day blunder.

Almeida says he found himself empty-handed last year after he failed to anticipate the holiday rush to order flowers online.

This time around, the 43-year-old pre-purchased a bouquet to gift his mother before taking her out for a surprise celebration.

Almeida booked reservations for a patio brunch Sunday, which will be his mother's first meal at a restaurant during the COVID-19 crisis.

As members of the same household, he and his parents are allowed to dine outdoors together under Manitoba's public health rules.

They've also each received their first dose of the COVID-19 vaccine, and absent that layer of protection, Almeida doubts his mother would feel comfortable eating out.

The holiday won't be the same without the rest of the family, he says, but at least it's a way to mark the occasion.

“Christmas, Thanksgiving, Easter - we didn't do anything for that,” he says. “Mother's Day is a big deal.”

Joanne Pullin in Fletchers Lake, a suburb of Halifax, says she and her 24-year-old daughter, Alex Ryan, often treat themselves to a meal out for Mother's Day.

But that option was ruled out when in-person dining was prohibited as part of Nova Scotia's “circuit breaker” lockdown.

Pullin says she and Ryan are taking the opportunity to hone their cooking skills by taking a virtual tutorial on Italian cuisine together at her home.

While it may be a break from tradition, Pullin says the chance to do something different with her daughter makes Mother's Day all the more special.

“We appreciate each other and love each other, and we've been very fortunate so far.”

As he and his mother wait for their second shots, Kozuch says he's already preparing for next Mother's Day.

The last time he saw her, Kozuch says his mother gave him a few cookbooks, and he hopes to use those recipes to make her a three-course meal.

“You sacrifice the strength of a lot of personal relationships in the short term in the hopes that you can make up for it in the long term.”

This report by The Canadian Press was first published May 6, 2021.