Canadians to spend 13 per cent more on back to school shopping this year, survey suggests 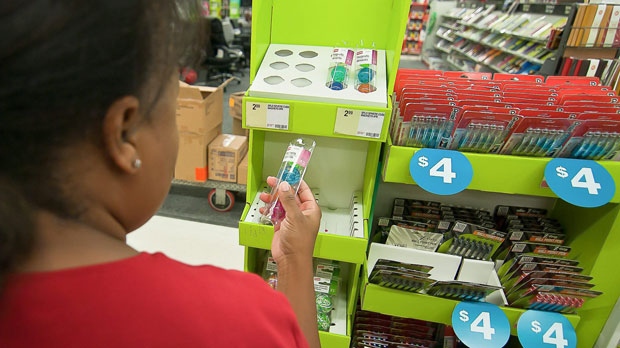 TORONTO -- A new BMO survey predicts that Canadians will spend 13 per cent more on back-to-school shopping this year compared to last.

The survey, conducted by Pollara, says consumers will spend an average of $362 on everything from shoes to laptops, up from $319 last year.

About 46 per cent of shoppers are expected to shop at local retailers, with about a quarter going online to get geared up for the school season.

The study says 54 per cent of Canadians will be shopping this back to school season.

The average amount spent is expected to be $164 for a child in elementary school, $171 for a high schooler and $213 for a post-secondary student.

The survey, which polled 1,000 Canadians, is considered accurate to within 3.1 percentage points, 19 times out of 20.

"For many retail businesses, the back-to-school shopping season is the second most important sales period in the year," said BMO Commercial Banking vice-president Cathy Pin.

"It is also a great opportunity for shoppers to support their local businesses when buying the necessities to get the school year off on the right foot."

An earlier study released by Ernst & Young predicted that back-to-school sales will grow only modestly this year compared to last, as consumer confidence remains low and Canadian retailers face growing competition from south of the border.

The study said back-to-school spending is set to increase by 2.5 per cent in Canada this year compared to last year.

Daniel Baer, national retail industry leader at the firm, said while the increased spending is in line with population growth and inflation, it is much lower than the 6.5 per cent increase in pre-recession seasonal spending seen from 2006 to 2007.