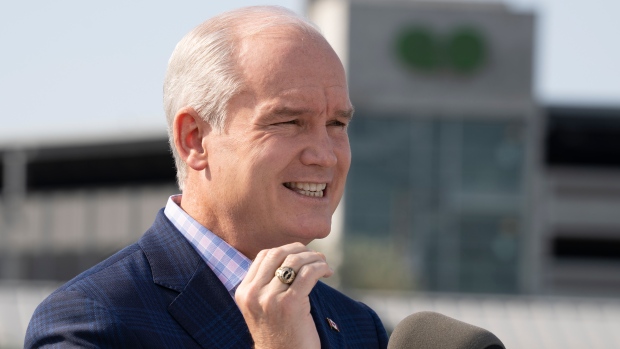 WHITBY, Ont. -- Candidate controversies over vaccines and Islamophobia dogged Erin O'Toole's campaign Saturday as the Conservative leader made his pitch to residents in the Greater Toronto Area, a vote-rich region crucial to the outcome of the federal election on Sept. 20.

The GTA sprawls across more than 50 ridings, the vast majority of which are held by Liberals, including all 25 seats in Toronto proper.

But O'Toole has suburban and exurban voters in his sights as he aims to boost the Conservative share of the vote in the broader region.

The party won a majority of seats there 10 years ago, but lost out to Justin Trudeau's Liberals in 2015 and saw its vote share drop another five points under then-leader Andrew Scheer in 2019.

But the pitch did not go off without a hitch.

On Friday, when the Tories launched their latest GTA tour in Mississauga, Ont., the Conservative party confirmed they had dumped Beaches-East York candidate Lisa Robinson after the riding's Liberal incumbent, Nate Erskine-Smith, highlighted Islamophobic tweets from 2017.

One post stated that Muslim residents should "go home if our Canadian heritage offends you so much."

"The information contained in Mr. Erskine-Smith's social media post was generated by a fake social media account which I reported to police in 2018. I have also signed an attestation confirming these facts," she said in a post on her campaign Facebook page Friday.

"Racism and Islamophobia have no place in the Conservative Party of Canada or my campaign."

Earlier this week a Tory candidate in Nova Scotia apologized for social media posts that weighed in on sharia law and backed banning the burqa worn by some Muslim women.

"In the past I have shared social media posts without thinking about how these posts might hurt or offend others," Central Nova nominee Steven Cotter said in a statement provided by the party.

"I have deleted these posts and apologize unreservedly to those I have offended."

Asked Saturday by the Canadian Press why Cotter remains a candidate while Robinson does not, O'Toole replied: "We're running a positive campaign based on bringing the country together and getting the country back on its feet from an economic point of view. And I want people on my team to share that."

Cotter is running in a riding won in the past by prominent Tories Peter MacKay and Brian Mulroney, and currently held by the Liberals' Sean Fraser.

O'Toole also appeared to give tacit approval for Conservative candidates who are not fully vaccinated to campaign in retirement residences, so long as they abide by public health measures.

The question came up after Conservative candidate for Peterborough-Kawartha, Michelle Ferreri, posted photos of herself to social media canvassing in a seniors' residence despite having received only one shot.

"We will be following all measures, including vaccines, daily rapid testing, masking and social distancing, to keep people safe. That's not only an expectation, it's a commitment that all members of our team have to keep people safe in a pandemic election that Mr. Trudeau called," O'Toole said.

The Saturday morning event in a GO Transit parking lot marked the Tory leader's second visit to Liberal-held Whitby in two days and came just before he flew to British Columbia to make his closing arguments to voters on the West Coast.

Asked Saturday if he would commit at least $5 billion to transit, O'Toole declined to offer specifics, acknowledging that the platform serves up no new funding.

"The money is in large part allocated in the framework over the next decade, but unless you get a government that can actually deliver, it's not going to get projects done.

The Conservatives say they will prioritize construction of four rapid transit projects in the GTA: the Ontario line, which would include a section running underneath Queen Street; an extension to the Yonge subway line reaching into Markham and Richmond Hill; the controversial three-stop Scarborough subway extension; and an add-on to the Eglington light-rail line bound for west Toronto and neighbouring Mississauga.

O'Toole also zeroed in on the housing crisis, re-announcing a suite of measures to cool the sizzling local market and put home ownership within reach of more Canadians. The plan, which folds into an affordability thread he's been weaving throughout the campaign, includes building a million homes in three years and raising barriers to foreign investors.

Similarly, the Liberals have promised to build 1.4 million homes over four years and block foreign nationals from buying them for two, as well as promising to curb the practice of "flipping" properties.

"Far too many people, especially young people, are priced out of the housing market," O'Toole said.

"Too many are already struggling with mortgage and car payments, buying gas and groceries, while Justin Trudeau drives up the cost of everything with his out-of-control spending, borrowing and debt," he said.

Home prices have continued to climb this year -- even in suburban corners of the GTA -- as remote work persists and business shutdowns during the COVID-19 pandemic helped people save cash for big purchases.

The average price of a home in the area rose to $1.07 million in August from about $951,000 at the same time last year, according to the Toronto Regional Real Estate board.

O'Toole sought to stress his roots in the area, noting he grew up in Bowmanville, Ont., when his dad worked at a GM plant in nearby Oshawa before going on to serve as a Tory lawmaker in the provincial legislature for 19 years.

"I had a 905 phone number growing up. And I still do," he said, adding he knows well the daily suburban commute from his time as a Bay Street lawyer.

This report by The Canadian Press was first published Sept. 11, 2021.