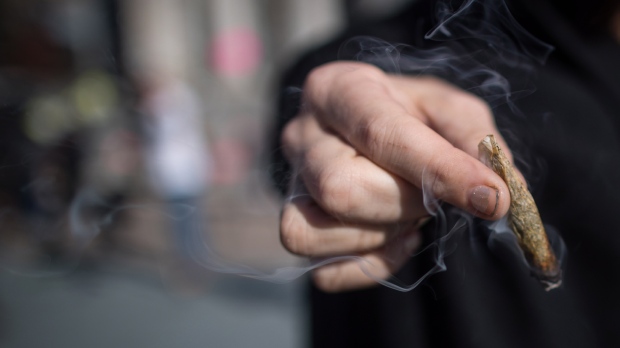 A man holds a joint while smoking marijuana to celebrate the legalization of recreational cannabis, in Vancouver, on Wednesday October 17, 2018. Canadian cannabis users are doing a lot less puff puff pass during the COVID-19 pandemic, as people try to minimize their distance and contact with one another.THE CANADIAN PRESS/Darryl Dyck

TORONTO -- Canadian cannabis users are doing a lot less puff, puff, pass during the COVID-19 pandemic, as people try to minimize their distance and contact with one another.

The shift away from sharing joints is pushing up pre-roll sales and encouraging companies to rethink product sizes, say members of the cannabis industry.

"We started to notice the shift that was going on back in the winter," says Kelly Olsen, the vice-president of Canopy Growth Corp.'s global flower business.

"Consumers were no longer comfortable with sharing joints anymore... and the weight sizes that were available in the market were not really providing the optimal experience for them.

Research commissioned by the Smiths Falls, Ont. company revealed that the pre-roll joint category grew by 48 per cent across the entire market between January and May 2021.

Part of that sales increase is attributable to a significant rise in the number of cannabis stores, but Canopy says Canadians who feel that traditional 0.5 gram joints are too big for them to enjoy in one sitting, and who worry about passing germs along with joints, are factors as well.

Its Tweed Quickies now come in 10 packs of 0.35 gram joints in the Green Cush and Afghan Kush varietals.

Its Ace Valley Pinners are sold in 8 packs of 0.3 gram joints and available in the Kosher Kush (Indica), OG Melon (Sativa) and Great White Shark varietals.

Redecan and Pure Sunfarms also make 0.3 or 0.35 gram pre-rolls and offer them in packs of at least 10.

Demand for such products is high, says Mimi Lam.

Pre-rolls now make up about 20 per cent of sales at her Superette cannabis stores, up from 10 per cent last year, and 90 per cent of those sales are multi-packs.

She's noticed consumers are moving away from 0.5 and 1 gram joints and toward those with around 0.35 grams.

"We have heard feedback that people have been less inclined to share joints over COVID or have been consuming alone, which could explain the increased interest in smaller pre-rolls by customers and the influx of new offerings for this category from licensed producers," Lam says in an email.

Lisa Campbell, chief executive at cannabis marketing company Mercari Agency, says the smaller pre-rolls are often called "dog walker" joints because they cater to people who want to partake in pot but only have roughly the time of a dog walk to smoke it.

Like Lam, she has seen demand for large pre-roll packs soar during the pandemic because people "don't want to share joints, but they want to have joints to share."

She has noticed people now bring their own vape devices and pre-rolls to gatherings. Most also don't want their friends rolling joints for them because sealing the joint often involves a lick.

"That's really gross from the COVID perspective," she says. "They'd rather just have a pack that they can just open and offer their friends to take one."

Canopy says its joints are made with rolling papers that are pre-sealed by an automated machine, so customers needn't worry about who has handled them.

Olsen believes that habit will stick around, even if the pandemic subsides.

"My sense is it's an evolution of a trend," she says. "I think it's here to stay and likely evolve a little bit further because there's been some permanent shift in consumer behaviour."