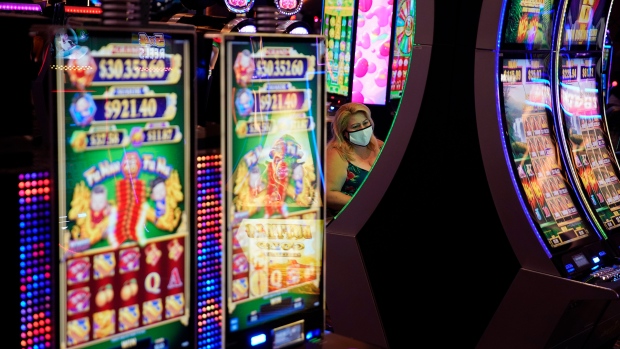 A person wears a face mask as a precaution against the coronavirus as they play an electronic slot machine on the Fourth of July at the Strat hotel-casino Saturday, July 4, 2020, in Las Vegas. (AP Photo/John Locher)

Various public services including criminal courts and casinos will reopen over the next four weeks despite the province's announced "pause" in announcing new measures to relax restrictions imposed by COVID-19.

And provincial officials say there is nothing they plan to do to change that despite a steady increase in COVID-19 infections across the province.

"That's what we're sticking to at this moment and we're asking them to stay the course, as well as convention centres," Ontario Chief Medical Officer of Health Dr. David Williams said of the pending reopening of casinos.

Eleven OLG casinos operated by Great Canadian Gaming Corporation are planning to reopen their doors, with slot machines but no table games, as of Sept. 28.

The eleven casinos include Casino Woodbine in Etobicoke and Casino Ajax, as well as locations in Belleville, Brantford, Peterborough, Port Perry and Elora.

Occupancy at the casinos will be capped at 50 patrons at a time per provincial guidelines.

Also, at least 20 locations of the Ontario Court of Justice are planning to resume preliminary hearings and criminal trials on Sept. 14.

Williams said that they need to balance the growing need for more criminal trial capacity with concerns about infection inside courtrooms.

"There's a large backlog and a lot of issues to be handled as well – so there's pressure to do that – but it doesn't mean we can't do it safely," he said, adding a large number of measures aimed at physical distancing and physical barriers between participants in court hearings have been adopted.

In Toronto, public court service counters are reopening to the public, by appointment only, also on Sept. 14.

Over the past two weeks, daily COVID-19 infections have surpassed 100 every single day, after falling below that threshold from late July into mid-August.

The Ford government had previously mused about increasing flexibility around "social circles," and spectators at sporting events or cultural events as things they could possibly allow if case growth continued to decline.