A Toronto councillor says that the city was “caught off guard” by several violent incidents that unfolded at Woodbine Beach on Sunday night and has to do a better of ensuring that there is a increased police presence at the popular destination on long weekends.

A total of 19 people were arrested and seven officers were injured after a violent night at the east-end beach on Sunday, which saw two people shot and two people robbed at gunpoint. There were also multiple incidents involving people firing Roman candles at one another.

On Monday night the situation was calmer, however police said that one person was stabbed during a fight at Ashbridges Bay Park. A total of five people were also arrested for various offences in and around the beach on Monday night.

“We were caught off guard and frankly, you know, we have to own some of that,” the city councillor for the area, Brad Bradford, told CP24 on Tuesday morning. “Our frontline men and women officers did a tremendous job. They were trying the best with the resources that they had. But I think the fact that you see seven injuries to officers is a pretty strong indication that we didn't have a handle on that. So when you look at command in the leadership decisions, we need to make sure that on long weekends we have the resources available to keep everybody safe, to keep the community safe, visitors safe and of course our officers that are there carrying out their duties safe.”

Bradford said that the violence that occurred at Woodbine Beach over the weekend, particularly on Sunday night, was “unacceptable” and cannot happen again.

He said that the impact on residents has also been significant.

“I spent all Monday afternoon going up and down the streets here talking to neighbors and what happened Sunday evening was terrifying,” he said. “The lawless behavior, the indiscriminate firing of Roman candles at people, at objects, property destruction. It has to stop.” 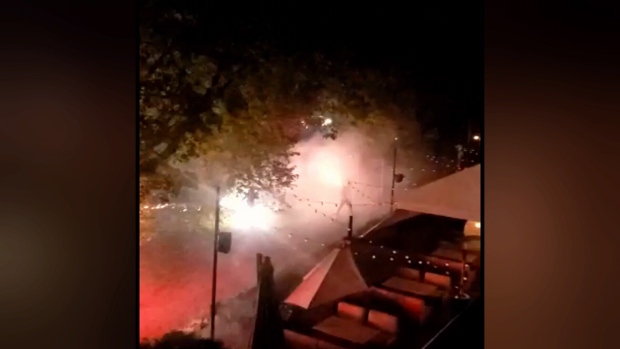 Police have previously said that at least one of the injured officers was “struck directly in the face with a firework and suffered serious abrasions to his face ears and eyes.”

Another officer broke a leg in pursuit of a shooting suspect.

Bradford said that going forward he would like to see more resources in places like Woodbine Beach on long weekends when there is typically an influx of visitors.

“We are an attraction not just for the city but the entire region. People come down here, they want to have a good time and we want them to come and have a good time but they have to be safe and courteous and respectful and we need to make sure that we have the enforcement and if things get out of hand that we're able to handle it,” he said. “You are not going to see what we saw this past Sunday night going forward. We need to have the resources in place to make sure things don't get out of hand.”

Mayor John Tory has previously said that the violence which occurred at Woodbine Beach over the weekend was “totally unacceptable” and amounted to “hooliganism.”

He has also said that he has spoken with Chief James Ramer about “additional steps that could be taken to limit the presence of fireworks on our beaches and keep them safe going forward."