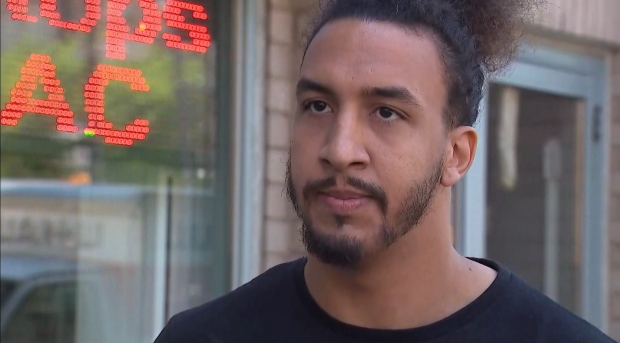 The CFL player accused on social media of allegedly playing a role in a homophobic attack on Toronto Island addressed the allegations with CTV News Toronto Wednesday.

Ottawa Redblacks defensive lineman Chris Larsen, 25, stood side by side with his lawyer, Calvin Barry when he explained he was on the Island the night David Gomez was seriously injured.

Larsen said he was there for the good weather and a birthday for a friend, who he identified as a member of the LGBTQ2S+ community.

“Heading off the Island to go home, got into an incident and happened to be a bystander there. Something happened. That’s all I can really say,” Larsen said.

“He didn’t espouse any hate. He didn’t assault anyone. Directly or indirectly,” Barry said.

“He went to the police last Friday and we found out very shortly after, Monday, was confirmatory that he’s not a suspect and that at most he might be a witness to some of the narrative to that happened when other people were allegedly assaulting the complainant,” Barry said

Larsen was suspended from his team following the incident. CTV News Toronto reached to the Ottawa Redblacks Wednesday. The team said there has been no official change to Larsen’s status.

The alleged homophobic attack happened on Jun. 5 around 11:30 p.m. It left Gomez, 24, with serious injuries on his lower back. He also required surgery to repair his face.

“I haven’t been able to sleep much. I can’t close my eyes without waking up in fear,” he told CTV News in an interview Wednesday.

“There’s a possibility of me needing more surgery, invasive surgery on my face. I have a cane to help me walk.” 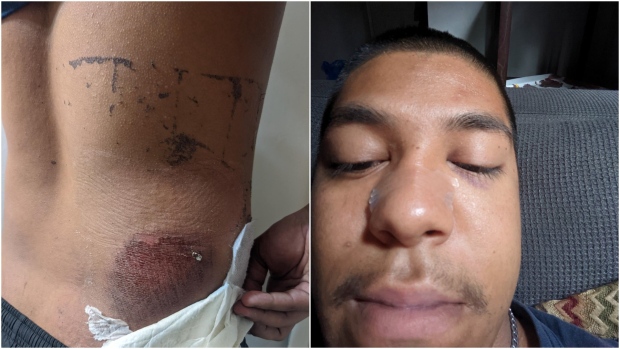 Gomez was on the Island with a friend. Toronto police say they got into an disagreement with a group and a man from the group made homophobic comments toward the pair. Two men then kicked and punched Gomez.

No arrests have been made in connection with the attack and Toronto police say it remains an active investigation. Police have never named any persons of interest or suspects in this investigation.

Gomez claims Larsen was biking toward him and his friend at very fast speed. Gomez said he told him to slow down. He then said Larsen followed him for about 10 minutes and would not leave them alone saying they were going to be friends.

Larsen and his lawyer would not respond to this allegation, citing the ongoing police investigation.

Gomez said police have been transparent and supportive, and believes the truth is going to come out.

“I can stand with my chest raised high and know in full confidence … I know what happened,” he said. “I’m looking forward to this outcome.”