Change in police attitude toward drugs welcomed by local observers 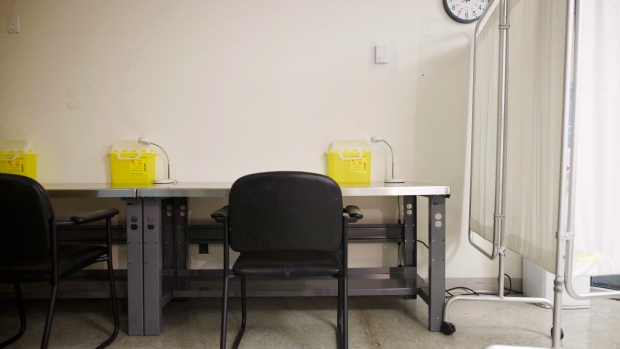 Stations can be seen at the new interim injection site in Toronto Public Health's offices at Dundas and Victoria St. in Toronto on Monday, August 21, 2017. THE CANADIAN PRESS/Cole Burston

Police observers and those on the front lines of the overdose epidemic that has hit the GTA in recent years are welcoming a policy change toward illicit drug use by Canada’s police chiefs.

In a statement earlier this week, the Canadian Association of Chiefs of Police (CACP) said that they are now calling for all police agencies in Canada to recognize substance abuse and addiction as a public health issue. The agency also said that it is endorsing the decriminalization of personal possession of small quantities of illicit drugs.

The move marks the first time that the organization has formally adopted such a stance.

“I cannot overstate the significance of the statement from the chiefs of police,” Coun. Joe Cressy told CP24.com.

Cressy serves as chair of the Toronto Board of Health, which renewed a call in June for the federal government to decriminalize all drugs.

“For too long the criminal justice approach, ‘just say no’ approach, the arrest your way to a solution has frankly done more harm than good when it comes to protecting the health and the lives of people who use drugs,” Cressy said.

Former Ontario Provincial Police commissioner Chris Lewis, who once sat on the board of directors for the CACP, told CP24.com that he’s watched the thinking around drug use evolve over the years.

He said there was a time about a decade ago when nearly every police chief in Ontario opposed any form of drug legalization.

“Back then we looked at the model in B.C. with safe injection sites as a direction we did not want to go,” Lewis said, explaining that the thinking then was that it would turn neighbourhoods into slums.

“The current head of the Canadian Association is from Vancouver and so he’s lived through all that in his career and he’s confident and people are agreeing with him that it’s time to do that. It needs to be done carefully based on what they’ve learned in B.C. and that is a better approach than what we’ve been trying to do traditionally – arrest our way out of all this mess – because that’s not working.”

Lewis said there has been a gradual recognition that you don’t want to “ruin people’s lives over a line of coke.”

He applauded the idea that police should help direct people to treatment and recovery programs as opposed to treating them like criminals.

“Just arresting someone who doesn’t have five cents to their name and they’re addicted to meth and they don’t have any teeth – what’s putting them in jail going to do?” he said.

However he noted that decriminalization is not the same as legalization and said that police should continue to go after sellers and distributors of illicit drugs.

Cressy acknowledged that the idea of decriminalizing drug use may alarm some people.

“When you’re dealing with an issue that has historically had such controversy and stigma surrounding it like drug use, a lot of people are uncomfortable at an emotional level with the notion of decriminalization of drugs,” he said. “But sometimes the best policy is complex and that’s the case with drug use.

“We’re not seeking to decriminalize drug use because we want people to use drugs. Just the opposite; we know there are harms associated with drugs and by decriminalizing it, you can reduce those harms.”

He noted that in both Toronto and Ontario, overdose deaths have spiked to a three-year high in recent months, owing to both reduced harm reduction services because of the COVID-19 pandemic and  “an extremely tainted illicit supply.”

“At the end of the day, these deaths are preventable. It requires a safe regulated supply and a new legal approach but there is a better way,” Cressy said.

The shifting attitude toward drugs by Canada’s police chiefs comes at a time when there are wider calls for police to change how they do things.

Peel Regional Police Chief Nishan Duraiappah, who has been on the job since October, has said he sees his role as coming with a mandate for change in policing.

In a recent video posted online, he said the Peel police service is in the process of “significant systemic organizational change” that is “cantered on human rights.”

“We recognize we have to rethink our roles and adjust,” Duraiappah said in the video.  He added that the force is looking to reduce the demand for crisis response when it comes to mental health and addictions.

In a further statement to CP24.com, he said that addictions, substance abuse, and mental health are complex social issues which require “collaboration between service providers.”

“This approach is in keeping with the Community Safety and Well-being (CSWB) model which is being adopted by our police service.  CSWB has evolved through the realization that many social issues, such as the use of illicit drugs, are more effectively addressed through coordinated upstream interventions, delivered by other providers such as health, addictions counselling services, etc.

“While police have a clear role responding to emergencies and situations of elevated risk, there are other options towards prevention and social development which can create better outcomes for our community. We need to ensure we are delivering the right service at the right time.”

A spokesperson for outgoing Toronto police Chief Mark Saunders declined to provide a comment on the CACP statement.

While the policy shift around policing and drugs comes at the same time as a discussion around defunding police forces, Lewis said he doesn’t see the one as flowing from the other.

“I don’t think it’s as a result of what’s been going on with the defunding discussion but it certainly is timely, just totally coincidentally, with that whole discussion,” he said.

He said the chiefs’ new position “does fall in line with the recent discussion around what the police do versus other agencies and how do they work together to have a real impact.”

He pointed to defunding of social services over the years as one of the reasons that police have been left to deal with many issues that they might not be best equipped for – including drug use.

Cressy said the next step is for the federal government to change the legal framework around drug use.

“For years now public health experts have called for a new approach to drug use. We now have law enforcement joining that call. The next step is for politicians to join,” Cressy said.

Still he called the CACP statement a “significant and important shift coming from law-enforcement” that “reflects is the need fundamentally for a new legal approach to drug use in our country.”