Changes to streetcar service will start Monday to accommodate major construction at foot of Roncesvalles Ave. 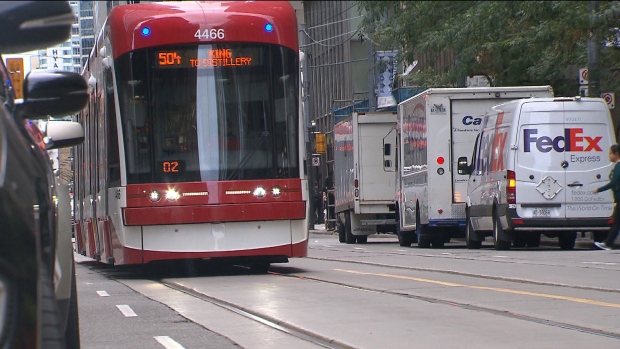 Streetcar service changes will begin Monday to accommodate upgrades being made to a major intersection in Toronto’s west end.

Starting on April 5, the intersection of King Street, Queen Street, The Queensway, and Roncesvalles Avenue (KQQR) will be partially closed to facilitate work that will continue through to summer 2022.

The city and the TTC are planning major upgrades to the intersection at the foot of Roncesvalles Avenue where the four major streets meet. The changes will include streetcar track replacement, enhancements to streetcar stops, improved safety features for pedestrian and cyclists, and work on lighting, water mains and sewers.

Streetcars servicing King Street, Queen Street, Roncesvalles Avenue and the Queensway all make use of the intersection, meaning that service on those streets will see some changes.

The TTC says the following changes will be in effect as of April 5:

- 501P/301P Queen buses will operate on Queen Street West between Park Lawn Loop in the west and the Queen/Jarvis area in the east, diverting both ways at the KQQR intersection via Queen Street West, Dufferin Street, King Street West and The Queensway.

- 501L/301L Queen buses will operate on Queen Street West between Long Branch Loop in the west and the Queen/Jarvis area in the east, diverting both ways at the KQQR intersection similar to 501P buses.

- 504G/304G King buses (north of Queen Street West) will operate on Roncesvalles Avenue between Dundas West Station and TTC's Roncesvalles Yard. No customer pick-up or drop off will be available inside the yard.

Customer service agents will be on hand to help riders with the changes and the TTC says signs will also be posted to direct riders.

While most of the work will take place between 7 a.m. and 7 p.m. Monday to Friday, the TTC says additional hours may be added as needed and that there will also be periods of 24-hour work between April and June to allow crews to install the new tracks.