Chapters store at John and Richmond to close in May 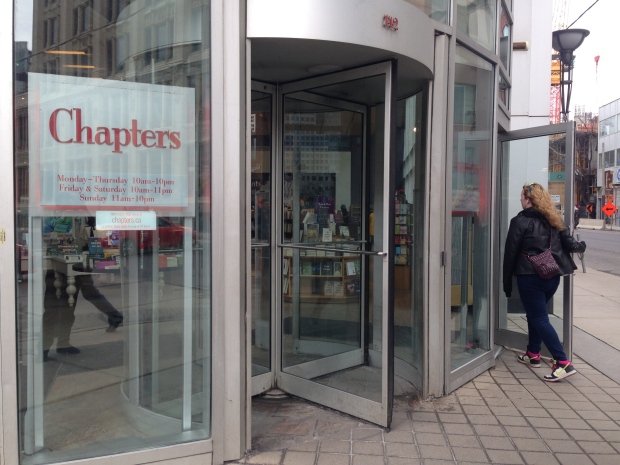 Canada’s largest bookstore chain has confirmed plans to close a prominent location in downtown Toronto, delivering another blow to book lovers who were already facing a dwindling number of options in the city’s core.

The Chapters Festival Hall store at John and Richmond streets will close its doors May 30, said Janet Eger, a spokeswoman for Indigo Books and Music, the Toronto-based company that owns the Chapters brand.

The company did not specify what the closure means for the store’s employees.

“We are working closely with our human resources team to support our valued employees through this transition,” Eger said in a written statement.

Indigo made the “difficult decision” not to renew its lease after lengthy negotiations, but it is looking at opening new bookstores in the Toronto area, Eger said.

“We believe there continue to be opportunities for us to better serve our GTA customers and we are actively looking for new real estate options in Oakville, downtown Toronto and Bloor West Village that will best meet our requirements,” she said.

Indigo has six other locations in downtown Toronto, including some smaller shops.

The Chapters location at John and Richmond is located in RioCan Hall, a sprawling complex owned by RioCan, a real estate investment trust. Other tenants in the building include Scotiabank Theatre, Marshalls and Milestones Grill & Bar.

What's next for bookstore space?

Chapters customers, especially those who live or work nearby, are lamenting the impending closure and wondering what will become of the space.

"I guess it's a little sad that it's going to be gone," said customer Karen Knox, as she exited store Tuesday afternoon. "There are not a lot of independent bookstores around here. It's not every day that a big chain closes."

"I think I'm probably more scared about what's going to go in it instead," said Candice Chan before she ordered a drink from a Starbucks kiosk on the bookstore's second floor. "It's probably going to be a less useful big-box store. If it's something this big, it's going to be a chain."

Some people who spoke to CP24.com said they would welcome a grocery store in Chapters' place.

Toronto has seen the demise of several chain or independent bookstores in the last 12 months, including a Chapters location in an old theatre at Bloor Street West and Runnymede Road - a favourite location for book lovers.

Other closures include the World’s Biggest Bookstore near Yonge and Dundas streets and independent stores such as Book City in The Annex, Nicholas Hoare on Front Street, The Cookbook Store in Yorkville, and Steven Temple Books and BMV on Queen Street West.