Officers showed up at the Queen Elizabeth Blvd. location of Adamson Barbecue at around 11 a.m. on Wednesday after owner Adam Skelly reopened the business, despite Toronto Public Health having formally ordered its closure for allowing customers to eat inside on Tuesday.

At one point footage from the scene showed dozens of patrons inside the restaurant, many of them without face coverings, in a repeat of the scene from one day prior.

The patrons, however, vacated the premises shortly before noon and police were seen blocking the entrance so that nobody else could go inside.

At a news conference at 22 Division late Wednesday afternoon, Supt. Domenic Sinopoli confirmed that police have charged both Skelly and the corporation that the restaurant is registered to with a combined eight charges under the Reopening Ontario Act as well as one additional charge for operating in contravention of the Toronto Public Health order.

The City of Toronto has also confirmed to CP24 that Skelly is facing two municipal bylaw charges for operating a business without a licence.

“The messaging that went to our folks at the beginning of the day was to make this as much of a passive and peaceful event as possible,” Supt. Domenic Sinopoli told reporters. “We understand the frustration of the business community. But at the end of the day our job is to enforce the laws and that is what we intend on doing today and tomorrow.” 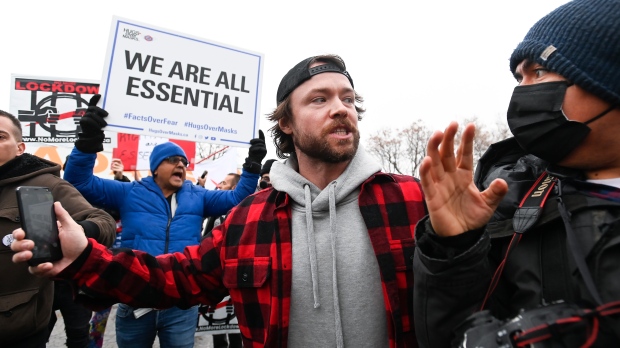 The enhanced police presence at Adamson Barbecue came one day after dozens of customers were seen eating inside and on picnic benches set up outside the restaurant in direct contravention of the lockdown order that went into place in Toronto at the start of the week.

The brazen flouting of rules eventually led to a decision by Medical Officer of Health Dr. Eileen de Villa to use her powers under the Health Protection and Promotions Act to order the business to close but by the time police showed up to shut it down it was after 4 p.m. and Skelly was already in the process of closing for the day.

Then late Tuesday night Skelly seemed to hint that he would attempt to reopen the restaurant again, sharing an animated image on Instagram that depicted him standing on a police cruiser and wielding a spatula along with the caption “Etobicoke. 11 a.m. to sold out. Dine-in.” He then showed up at the restaurant at around 10 a.m. and, soon after, began serving customers.

Sinopoli said that at one point there was some thought given to dispersing the large crowd that showed up at the restaurant on Wednesday but a decision was ultimately made for officers to instead negotiate directly with Skelly in the hopes that he would eventually leave of his own volition, which he eventually did.

Skelly has reportedly vowed to reopen again on Thursday but Sinopoli said that police will be back to shut him down if that is the case.

“We are in a position to stop him if he opens tomorrow or the next day. The strategy will change from day to day depending on what we are faced with,” he said. 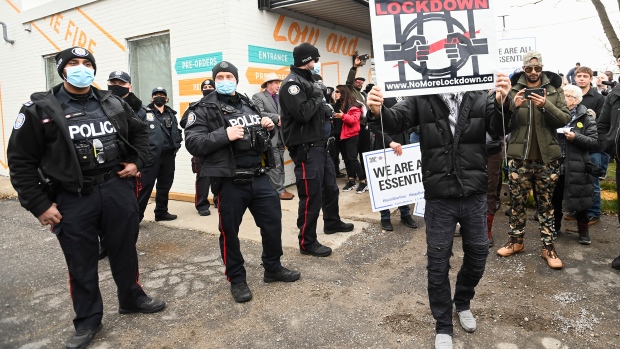 Premier Doug Ford did seem to express sympathy with Skelly on Tuesday, telling reporters that he “can’t get angry at any businessperson” right now given the struggles that they are facing “just to stay afloat.”

But his tone changed on Wednesday after the restauranteur decided to openly flout public health restrictions yet again.

“I was nice to the guy yesterday but buddy let me tell you something you need to shut down. You are putting people’s lives in jeopardy.,” he told reporters at Queen’s Park. “I always try to be nice the first time but this guy is just ignoring public health officials. That is how this spreads, that is how we get out of hand like the U.S. states where it is out of control right now. People are dying and he just wants to say forget it and have everyone down there…it is absolutely irresponsible and ridiculous.”

Toronto Mayor John Tory also weighed in on the situation during his regular briefing at city hall on Wednesday afternoon, calling it a “disgrace.”

He said while the enforcement of the law is not up to him, he would be supportive of police using large concrete blocks to prevent access to Adamson Barbecue, as they repeatedly did with illegal dispensaries prior to the legalization of cannabis.

“I do not direct law enforcement but if you asked my opinion as to whether I would be getting those concrete blocks out of storage right now and going if necessary and putting them in front of Adamson or anyone else that violates the law in that matter yes I would,” he said.

Skelly is due in court to answer to the charges on March 19.

People enjoy their food at Adamson Barbecue as the restaurant and people defy provincial lockdown orders to shut down indoor and outdoor dining during the COVID-19 pandemic in Toronto on Wednesday, November 25, 2020. THE CANADIAN PRESS/Nathan Denette

People are shown outside the Etobicoke location of Adamson Barbecue on Wednesday. The owner has vowed to reopen despite being ordered to close by Toronto Public Health. (Austin Delaney)