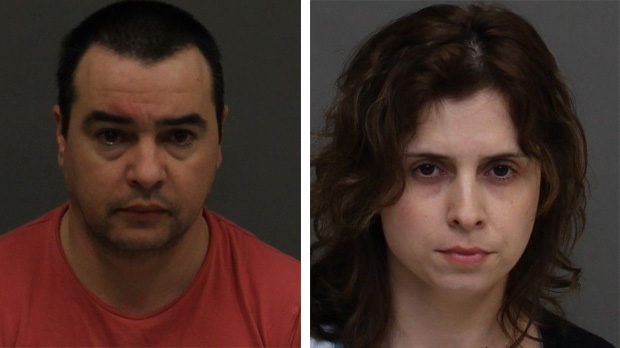 Luis Serpa Da Conceicao Santos, 38, (left) and Vera Nunes, 32, (right) are seen in these photographs handed out by Toronto police.

Toronto police upgraded charges Thursday against a couple accused of bilking a 94-year-old woman out of her life savings.

On Wednesday, police laid two counts of mischief under $5,000 against the elderly woman’s housekeeper and her husband but have since upgraded the charges to fraud over $5,000 and theft over $5,000. The pair has also been charged with being unlawfully in a dwelling.

Police said that Norma Marshall, 94, hired the housekeeper four years ago and agreed to help the woman out financially when she said she and her family were moving back home to Portugal.

At one point the housekeeper and her family moved in to Marshall’s home and police said the elderly woman was practically confined her to small bedroom in the residence.

Police are accusing the housekeeper of selling off the woman’s furniture and jewelry without her consent, defrauding Marshall out of $25,000.

Officers began investigating the couple after an astute pharmacist and delivery man became concerned about the situation and called police, prompting authorities to conduct a wellness check.

The Thorncliffe Pharmasave owners have set up a trust account and those who wish to donate to the Norma Marshall trust account can do so at any RBC branch.

The accused, Vera Nunes, 32, and her husband, Luis Serpa Da Conceicao Santos, 38, are scheduled to appear in court at the College Park courthouse on Friday at 10 a.m.