Cheese not on the table in Canada-U.K. trade talks as Britain seeks market access 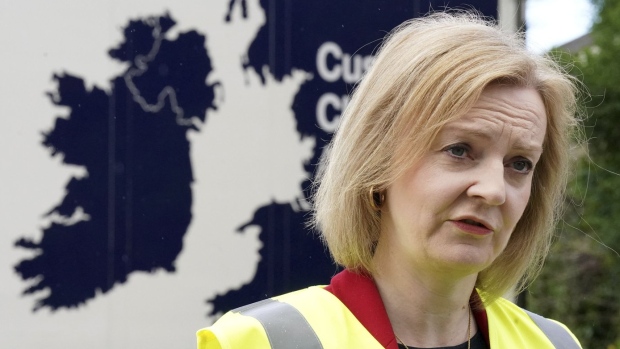 British Foreign Secretary Liz Truss speaks during a visit to McCulla Haulage to discuss the Northern Ireland protocol with businesses, in Lisburn, Northern Ireland, Wednesday May 25, 2022. THE CANADIAN PRESS/AP-Niall Carson/PA via AP

The British foreign secretary has often been mocked for her preoccupation with cheese. It started eight years ago when Liz Truss expressed outrage in a speech to her party’s annual conference.

“We import two thirds of our cheese,” she raged. “That is a disgrace.”

Now Truss is facing another battle over cheese, this time with Canada.

Britain wants greater access to Canadian markets for more than 700 varieties of cheese including Stilton, Cheshire, and Wensleydale, a crumbly variety originating from Yorkshire.

But Ottawa has made it clear it does not want to see more British cheddar, let alone artisan varieties such as stinking bishop, renegade monk and Hereford hop, on Canadian fridge shelves.

During the first round of negotiations of the U.K.-Canada trade deal, Canada told Britain that a larger quota for British cheese is not on the negotiating table.

When it was a European Union member, Britain was part of the Comprehensive Economic and Trade Agreement with Canada, giving it some access to Canada's cheese market.

After the U.K. left the EU, a “continuity agreement” with Canada was swiftly put in place to maintain the CETA arrangement until a bilateral trade deal could be struck.

Ralph Goodale, Canada’s high commissioner to the U.K., said if Britain wants more access to Canadian markets for its cheese as part of a bilateral free-trade agreement, it will have to knock on Brussels’ door and get its part of the dairy quota back.

“The point is we have already provided that volume in the EU deal and the British left it there without taking it with them," he said in an interview. "That’s an issue they need to resolve with the Europeans because the Europeans have their quota.”

Goodale said the U.K.’s request for extra access for British cheese — on top of the access given to the EU — is “what the Canadian negotiators consider to be pretty much a dead end.”

“You are talking about a double concession — one we have already made to the EU and the request is being made by the U.K. for yet another one on top of that,” he said.

The high commissioner said Canada values its trading relationship with the U.K., adding that he is confident that a mutually-beneficial trade deal will be reached.

But if Canada allows the British to export more of their cheese it would involve “a major commitment of compensation to dairy producers" in Canada to make up for lost incomes.

Canada’s dairy industry was worth over $7 billion in 2020, according to the Canadian Dairy Commission’s annual report.

There are over 10,000 dairy farms in Canada — most of them in Quebec and Ontario — with an average of 92 cows per farm, it said.

Until at least the end of next year, Britain will be able to keep exporting its cheese to Canada under the trade continuity agreement, the U.K.’s trade department said.

As part of the 1995 WTO agreement on agriculture, Canada established tariff rate quotas for cheese and other dairy products. The quotas set out quantities of dairy that could enter Canada with little or no duty.

For Britain, a fully fledged free trade deal with Canada is crucial after Brexit left it looking for fresh tariff-free markets.

“We want to negotiate an ambitious and comprehensive new agreement with Canada that will strengthen our close and historic bilateral trade relationship,” said a U.K. government trade spokesman in a statement, adding the relationship was worth about $34.5 billion in 2021.

As a sign of how seriously Downing Street is treating the trade talks, on Thursday Prime Minister Boris Johnson appointed Maria Miller, a senior Tory MP, former culture secretary and women and equalities minister, as his new trade envoy to Canada.

In a speech in the House of Lords in London earlier this month, Goodale reported on progress in the talks, saying that “both sides are optimistic that, as good as CETA and the continuity agreement were, we can do better still when Canada and the U.K. negotiate a deal face-to-face, directly with each other.”

Like Goodale, Ng said Canada is confident a free-trade deal with Britain will be reached, enhancing co-operation in a number of areas, including on renewables, sustainability and the digital economy.

“Canada values the relationship with the United Kingdom. They are … an important trading partner and a trade agreement with the U.K. will be very good for Canadian businesses,” she said in a phone interview from Thailand last weekend.

But she was also firm about the need to protect Canada’s dairy producers, and that means keeping more British cheese out.

The Canadian dairy sector now produces 1,450 varieties of cheese, including ewe, goat and buffalo varieties, as well as the cheese curds used in the Québécois dish poutine.

At least half of Canada’s cheese is made in Quebec, which is home to a number of artisan varieties including bleu l’ermite, or blue hermit, and Oka, a popular semi-soft rind cheese.

Pierre Lampron, president of the Dairy Farmers of Canada, has made it clear he will fiercely protect Canadian cheese from British interlopers.

Lampron said he had “validated that the issue of access to the Canadian dairy market was not on the agenda of these trade talks.”

Canada's protectionist stance toward its dairy industry may have pleased farmers. But it has caused some tension with close allies.

Earlier this month, New Zealand launched a formal trade dispute against Canada, accusing the federal government of breaking promises to give access for dairy imports under the Trans-Pacific Partnership agreement.

The Biden administration also recently said it was asking for a second dispute settlement panel under the U.S.-Mexico-Canada Agreement to review a trade dispute with Canada over dairy import quotas.

A selection of artisinal cheese is displayed in Quebec in this file photo from Thursday, Oct. 11, 2018.THE CANADIAN PRESS/Ryan Remiorz