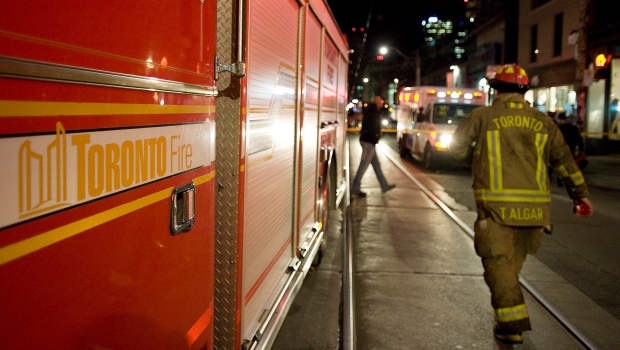 A Toronto Firefighter walks past a fire truck in Toronto on Thursday night, April 21, 2011. (Aaron Vincent Elkaim / THE CANADIAN PRESS)

Ontario’s Fire Marshal hopes that a chilling fictitious video in which a child is heard calling 911 while trapped in a house fire will encourage residents to check their smoke alarms.

In the video, which was posted to social media Wednesday, a child in obvious distress is heard calling police.

The emergency operator asks the child where they are, to which they respond “Me and my mom, we are trapped in the basement.”

“She is not waking up,” the child is heard saying.

Throughout the interaction, the crackling of fire can be heard in the background – lightly at first and then the volume increases.

“I can’t see at all. I can’t leave. There’s smoke everywhere. Please,” the crying child says.

At the end of the video, text appears asking the viewer if they notice anything missing from the audio.

“There were no working smoke alarms,” the text reads.

“They did not survive.”

The video—which was initially posted without specifying the call heard was staged—is being shared with a trigger warning, cautioning the content could be disturbing for those dealing with trauma.

Thank you for helping get #CauseForAlarm trending in Ontario! We know this call can be hard to listen to. Although it is fictitious, the message is very real. Ensure you have working smoke alarms on every storey of your home. Test your #smokealarms today. https://t.co/p9NXnXPe94

Ontario Fire Marshal Jon Pegg told CTV News Toronto that while the video is fictitious, it is similar to calls crews have received in the past.

“I will be totally honest with you, when the team presented this to me, my initial reaction was it goes too far,” Pegg said. “But when I when I think about my role as fire marshal, I have a legislated role to educate the public about fire safety. And when I when I thought about it, and I gave it some more thought, you know, this is exactly what we need.”

“We need people to have that … that emotional response. That they need to think about their own situation and that how this could happen literally to any of us.”

According to Pegg, 99 people in Ontario have died as a result of a fire in 2022.

“We're on pace to blow through the most we have ever seen in Ontario in any given year,” he said. “It doesn't sit well with my team and we had to come up with something to draw more attention to the issue and hopefully have people take the steps to protect themselves and their families.”

The video comes ahead of Fire Prevention Week in October. Pegg said that campaign will focus on how to create a fire escape plan.

“But the given the rise in fire fatalities, we thought it was important to get this message out about working smoke alarms ahead of home escape planning.”