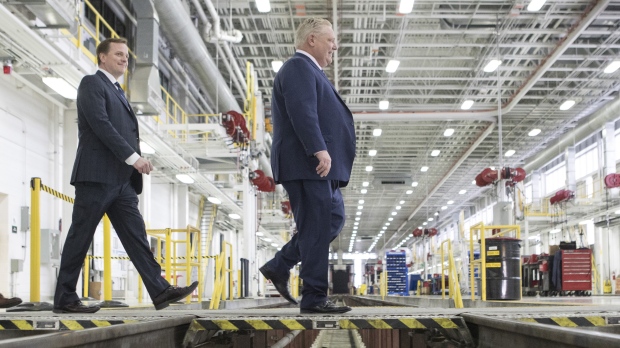 Ontario Premier Doug Ford, right, and Jeff Yurek, Provincial Minister of Transportation, make their way to a photo opportunity ahead of an announcement about Ontario's transit network, in Toronto on Wednesday, April, 10, 2019. THE CANADIAN PRESS/Chris Young

The city and the province have officially signed off on a preliminary agreement that will pave the way for a nearly $30 billion transit expansion plan.

The agreement was approved by city council back in October but wasn’t officially signed until today.

Under the terms of the agreement, the province will assume “sole responsibility for the planning, design and construction” of four major transit projects.

The agreement stipulates that the province will “own the resulting assets” but it says that the city will retain ownership and responsibility for the existing subway system and will be “responsible for the day-to-day operations” of the new lines.

The agreement also states that the city will retain all fare box revenue to defray operating costs.

“The signing of the preliminary Toronto-Ontario Transit Partnership Agreement is an important step in getting this work done and ensuring both governments are working in full cooperation,” Mayor John Tory said in a statement issued on Friday morning. “This agreement will accelerate four major transit projects in our city. Expanding our transit system will help ensure we can accommodate the growth Toronto is experiencing as North America's fastest growing city.”

The province has committed to invest $11.2 billion in the four transit projects with funding from the city and the federal government expected to cover the remainder of the estimated $28.5 billion cost.

As part of the preliminary agreement, the city is committing to honour its existing funding commitments to the Scarborough subway extension and the Eglinton Crosstown West Extension. The city is also agreeing to fund nearly 27 per cent of the total capital cost of the Ontario Line and a pro-rated share, along with York Region, of the nearly 27 per cent municipal contribution for the Yonge North subway extension.

“This agreement forms the foundation for our continued partnership and represents another important step forward to build a transit system for the 21st century faster for the people of the GTA,” Transportation Minister Caroline Mulroney said in a statement on Friday morning. “Premier Ford and the City of Toronto both share a commitment and responsibility to build transit infrastructure quickly and efficiently to keep people moving, to drive business investment and job creation, and to improve the environment.”

Mayor John Tory has said that the approximately $11.2 billion provincial investment in the city’s transit system will allow the city to spend billions on various state-of-good repair initiatives for the existing transit system, including the purchase of hundreds of new streetcars, buses and subway trains.