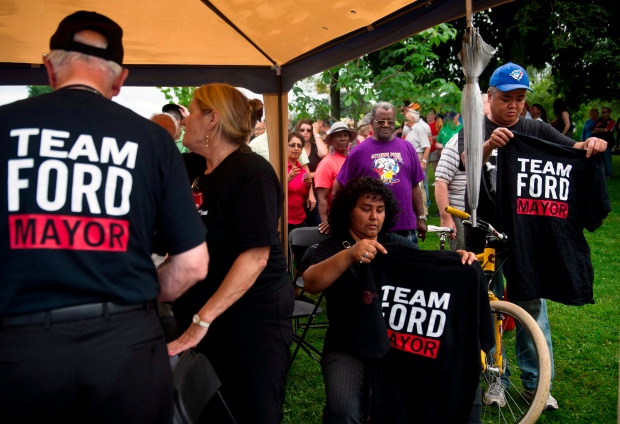 Supporters of Mayor Rob Ford are given T-shirts as they check in to Fordfest, the annual Ford family BBQ, held at Thomson Memorial Park in Toronto, Friday, July 5, 2013. THE CANADIAN PRESS/Galit Rodan

Rob Ford continued to fend off criticism about his upcoming Ford Fest event Wednesday, maintaining that the barbeque is not a part of his mayoral campaign.

At the opening of the city’s updated transportation operations centre Wednesday morning, Ford told reporters the event is simply a way to give back to the community.

But social media chatter indicates that some Torontonians are skeptical of mayor’s motives.

“Got a robo call from RoFo last night at dinner time about his BBQ on Friday and then at the end he says "if you support me press #3". Isn't this campaigning!” one Facebook user wrote.

This year’s event will be held in Thomson Memorial Park in Scarborough on Friday and mayoral candidates Olivia Chow and John Tory previously accused Ford of violating municipal election rules by hosting what they believed to be a campaign event in a city park.

According to the rules, "no permits, licenses, leases, or any other agreement for the use of City of Toronto facilities, including civic squares and parks, will be issued for the use or promotion of a particular candidate, political party, registrant or a supporter of question on a ballot during an election."

The city, however, sided with the Ford family and approved the permit this week.

The city previously told CTV News that city staff had "no administrative reasons" to deny him of one.

When questioned about the robocalls Wednesday, Ford said they have historically been the most effective way of getting the word out about the event, which he says has been held in the GTA since 1994.

“We have robocalled before… that is how you invite people,” Ford told members of the media.

“We want people to come.”