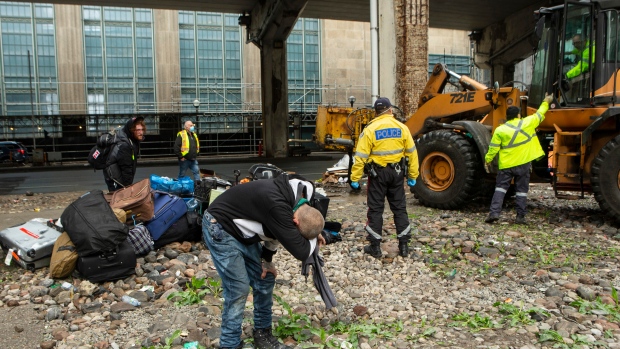 Jason reacts as city workers move to clear an encampment on Bay Street where he lived, in Toronto, Friday, May 15, 2020. The city is clearing homeless camps in the downtown area as part of their COVID-19 strategy. THE CANADIAN PRESS/Chris Young

That led to a standoff between officials and the homeless and their advocates who lined up in front of the growing number of tents in the area.

The city said it was clearing out the camps after offering various types of housing to the people living there.

Those who refused the city's offer of inside housing would have their tents removed, said Mary-Anne Bedard, Toronto's general manager of shelter, support and housing administration.

Jason Phillips, who lives in one of the tents under the Gardiner Expressway, said he was given an eviction notice by the city several days ago with an offer to move into a shelter.

As of Thursday, 341 people had tested positive for COVID-19 in the city's shelter system, with 299 active cases and two deaths across nine shelters.

“Seems every time I get set up in a camp where I can stay, they come and evict me,” Phillips said.

“I have a decent environment. I have friends here that help me. I don't want that taken away.”

As a backhoe slowly rolled towards Phillips' tent, Anna Jessup, an elementary school teacher who came down to fight the evictions, stood in front of it.

“This is not right what the city is doing,” she said.

Jessup's protest led to a peaceful standoff between those in tents and city workers, who then offered Phillips and several others their own rooms in a hotel.

Phillips accepted the offer, but said he was being pressured to pack up his belongings in a hurry so the city could continue cleaning up the area.

“It's very stressful and this is hard on my mental health,” said Phillips, noting he lives with bipolar disorder and post-traumatic stress.

“I just want to make sure I have all my stuff, like pictures of my wife and daughter, before they tear down my home,” he said.

Toronto Fire Chief Matthew Pegg said there are major hazards at some of these encampments.

“On Wednesday of this week, we cleared the hazards from another encampment ... where we removed more than 100 litres of gasoline and 17 propane tanks,” Pegg said.

He said they have responded to 55 fires at encampments this year, including 15 in the last two weeks.

One man died at a fire at his encampment two weeks ago.

The city is also in the midst of a massive program to move as many people as it can out of congregate living situations such as shelters into hotel rooms and apartments.

It has recently bought or leased numerous hotels to give people their own room in an effort to curb the spread of COVID-19. More than 2,500 people have been moved out of shelters and into 27 different temporary sites, Bedard said.

The city also recently signed an agreement with a developer to rent out 125 furnished rooms for those living in encampments, and has moved 97 people from tents into the apartment buildings in midtown Toronto, Bedard said.

Advocates have criticized the city's actions on the homeless front, accusing it of moving too slowly and leaving those inside shelters vulnerable to COVID-19.

A man who experienced homelessness reacts as city workers and police officers move to clear an encampment on Toronto's Bay Street where he lived, Friday, May 15, 2020. The city is clearing homeless camps in downtown Toronto as part of their COVID-19 strategy. THE CANADIAN PRESS/Chris Young

Two men who lived in an encampment on Toronto's Bay Street, collect their belongings as the city tears down the dwelling, on Friday May 15, 2020. The city is clearing homeless camps in downtown Toronto as part their COVID-19 strategy. THE CANADIAN PRESS/Chris Young