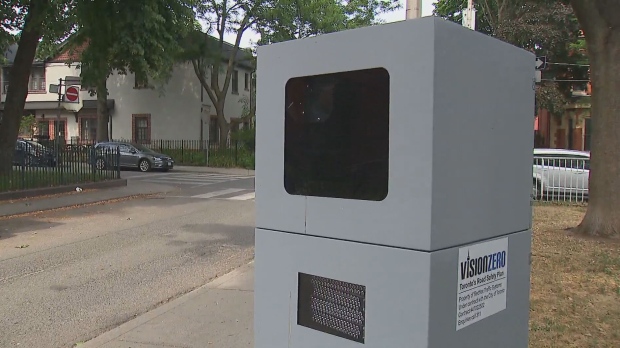 An automated speed enforcement device is seen in this undated photo.

An additional 25 photo radar cameras could soon be deployed across Toronto amid data suggesting that the technology is helping to slow down traffic and make the streets safer for pedestrians.

The city first installed 50 of the automated cameras in neighbourhoods across the city in 2020 and has been moving each of them to a new location every three to six months.

As a result, there have been calls to expand the program.

During a meeting of the infrastructure and environment committee on Tuesday members voted in favour of an omnibus staff report which provided an update on several aspects of the city’s Vision Zero strategy, including a plan to buy 25 additional speed cameras.

The staff report said that the additional cameras should be operational by 2023, though Mayor John Tory said in a letter to the committee that he would like to see efforts taken to have the new cameras up and running in 2022.

“I believe moving to increase the number of speed cameras in our city now will help us continue to improve road safety,” he said. “This is one important tool in our Vision Zero toolbox and it will send a clear message to drivers that they must slow down and obey the speed limits across our city.”

The city’s automated speed enforcement cameras are responsible for tens of thousands of tickets being issued each month to drivers caught exceeding posted limits in community safety zones near schools.

As part of the program drivers face a set fine based on how fast they are going but are not issued demerit points.

In his letter Tory said that he would like to see the automated speed enforcement program further expanded “at the earliest possible date.”

However in the report staff warn that any further expansion will result in a “substantial increase in the number of charges” and there will therefore be a requirement for additional provincial offences officers, as well as other supporting staff.

They also noted that “larger facilities/offices may be required to accommodate the increased staffing levels.”

“It’s clear that when these cameras go up, drivers slow down,” Tory said in arguing for a more comprehensive automated speed enforcement program.