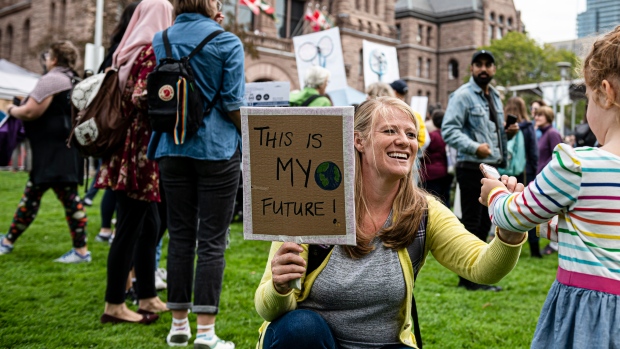 People gather at a climate protest in Toronto on Friday, Sept. 27, 2019. THE CANADIAN PRESS/Christopher Katsarov

Toronto city council has voted unanimously in favour of declaring a climate emergency in the city.

As part of the motion, which was passed at Wednesday’s council meeting, the city committed to a net zero greenhouse gas emissions target by 2050.

“The declaration approved by council today lays out what I believe are ambitious but realistic new targets to help focus our efforts when it comes to reducing Toronto's greenhouse gasses as quickly as possible." Mayor John Tory said in a written statement released Wednesday.

Canadian municipalities that have made similar declarations include Montreal, Ottawa, Edmonton, and Vancouver.

A report issued in 2018 by the United Nations Intergovernmental Panel on Climate Change states that global carbon dioxide emissions must be reduced to net zero by 2050 to curb global warming to 1.5 degrees.

Many scientists have said that there will be catastrophic consequences if dramatic change is not undertaken.

The city said Toronto’s community-wide emissions were 15 mega tonnes in 2017 and achieving net zero emissions would mean “bold and robust policies and programs” and “significant investment.”

Council has asked staff to analyze how the city’s TransformTO climate action strategy could be accelerated to reach the new target.

At a news conference ahead of today’s council meeting, Tory announced details of a new initiative between the city and Toronto’s largest land owners to cut down on energy consumption and emissions.

The partnership, dubbed The Green Will Initiative, involves land owners that represent more than 300 million square feet of space across Toronto.

Some of the partners involved in the project include Cadillac Fairview, Brookfield Asset Management, Oxford Properties, University Health Network, Ryerson University, and the Toronto District School Board.

According to the city, an energy reduction target will be set for the first five years and successive targets will follow.

“It all starts with these partners who are willing to work with us, and as the program grows I hope to see others - big or small, private or public - join us in this collaborative undertaking," Tory said. "Each group around the table has their own challenges in reducing their carbon footprints. Some are already leaders and some are looking to lead. Regardless, they understand how critical it is to transition to low carbon alternatives and the common-sense business case behind it."

On Friday, thousands of students in Toronto joined in on the protests, which were inspired by 16-year-old Swedish climate change activist Greta Thunberg.

Thunberg, who attended a rally in Montreal on Friday, called the promises of political leaders in her country and in Canada “empty words.”

“The politics needed are still nowhere in sight,” she said.