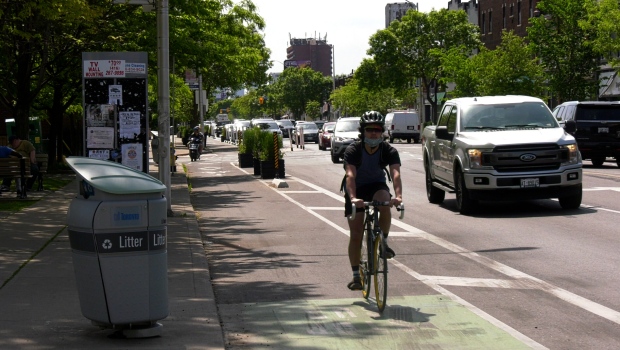 A cyclist on the Danforth bike lane. (Courtesy of Jon Woodward/CTV NEWS TORONTO)

On Thursday, council approved a recommendation that the bike lanes along Bloor Street East, Dundas Street East, University Avenue, Danforth Avenue, Bayview Avenue, Wilmington Avenue and Huntingwood Drive installed in 2020 be made a fixed part of the city’s cycling network.

The bike lane along Danforth Avenue also got the green light to be extended for 700 metres from Dawes Road to Victoria Park Avenue.

The seven bike lanes are part of the city’s ActiveTO Cycling Network Expansion, an initiative aimed at giving residents more ways to get around the city during the pandemic. City staff cited data that shows that all seven bike lanes have seen a significant increase in cyclist traffic while only having a “minimal” effect on automobile travel times.

In addition to the seven bike lanes, city council also voted in favour of a plan for 100 kilometres of new cycling routes that are expected to be completed by 2024.

“The ActiveTO bike network was intended as a quick and safe way to help us through the pandemic, by getting essential workers where they were needed to be and by helping people make essential trips. The ActiveTO bike lanes are an important part of Toronto’s rapidly growing cycling network and city staff are working to build on these bikeways to add another 100 kilometres of bike infrastructure over the coming years,” Mayor John Tory said in a statement.

“Making these routes permanent and making plans to expand the network even further where it makes sense, is the right and responsible thing to do and it will help more people get around our city safely by bike.”

Here are the seven bike lanes that have been made permanent:

-with files from Chris Fox